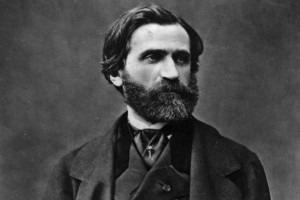 Giuseppe Verdi was one of the most precocious musical talents of all times. At age three, he was given a spinet and took up studies with Don Pietro Baistrocchi, organist at his home village of Roncale. When Baistrocchi passed away in 1822, the nine-year-old Giuseppe took over his teacher’s duties and continued his studies with Ferdinando Provesi, director of the municipal music school and philharmonic society and organist of St. Bartolomeo in the town of Busseto. During his stay in Busseto, Verdi apparently composed a quantity of sacred and secular works, but none of these juvenilia compositions have survived. When he applied for admission to the Milan Conservatory in 1832, Giuseppe was soundly rejected, with the examiner’s report citing “faulty piano technique; a promising composer with genuine imagination but in need of contrapuntal discipline.” Verdi never really came to terms with this rejection, and until his dying days related this experience with resentment and bitterness. Unable to join the Conservatory, Verdi became a private student of Vincenzo Lavigna, who had served as “maestro al cembalo” at La Scala, and concordantly as professor at the Milan Convervatory from 1802 until 1823. Between 1802 and 1810, Lavigna composed nine operas, including the 1809 Hoango set in ancient China. The Tartar princess Elgira is supposed to marry the Emperor Hoango, however she loves Julda. Unbeknownst to all, Julda is the rightful heir to the Chinese throne and all ends well.

In later years, Verdi spoke rather disparagingly of his student days and of the instruction he received from Lavigna. “In the three years I spent with him, I did nothing but canons and fugues, fugues and canons, served up in every fashion. No-one taught me orchestration or how to handle dramatic music.” Yet there is evidence that Verdi was asked to “write various pieces, mostly comic, which my master made me do as exercises and which were not even scored.” In 1836, Verdi returned to Busseto to become “maestro di music,” responsible for teaching vocal and instrumental classes alongside counterpoint and composition at the music school. In addition, he conducted the concerts of the philharmonic society. As confirmed by surviving programmes of the Busseto Academie, Verdi also conducted his own compositions, among them “a capriccio for horn, a recitative and aria, an introduction, variations and coda for bassoon and a buffo duet all by Signor Maestro Verdi.” A setting of Tantum ergo for tenor and orchestra, presumably composed in 1837, has survived. 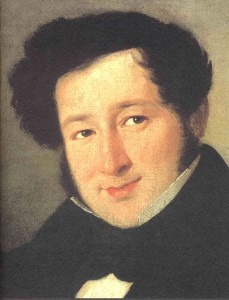 During his time in Milan, Verdi was a frequent visitor at the “Teatro alla Scala,” the world-famous opera house in the city. Inaugurated in 1778 with a performance of Antonio Salieri’s Europe riconosciuta, “La Scala” not only hosted a number of the finest singers and conductors, it also staged several important world premieres of works by Meyerbeer, Bellini, Donizetti and Gioachino Rossini. Rossini’s La pietra del paragon premiered in 1812, Aureliano in Palmira in 1813, and Il turco in Italia in 1814. Aureliano centers on the rivalry between the Roman Emperor Aurelian and Prince Arsace of Persia over the beautiful Zenobia, Queen of Palmyra, and the young Verdi saw numerous performances.

Concordantly, Verdi had been working on an opera himself for almost four years. He was already 26 when his first completed opera Oberto, Conte di San Bonifacio made its debut at “La Scala” in 1839. A rudimentary plot, involving warring factions in 13th-century Italy, offers few dramatic possibilities. Yet the historical subject based on war, revolution and an arranged marriage contains many themes that Verdi would explore in later projects. In Oberto, Verdi relies principally on the conventions and format of 19th-Century Italian Opera, and contemporary voices record that the opera enjoyed “a fair success.” Bartolomeo Merelli commissioned two further operas from the composer, and the publisher Ricordi signed a contract with the composer; an arrangement that eventually made them a both a small fortune.

The musical and dramatic language of Oberto, as we have seen, could not have been accomplished without the direct help from Vicenzo Lavigna, and the indirect aid from Gioachino Rossini. However, Verdi’s early operatic efforts also show the strong musical influence of Saverio Mercadante, Federico Ricci and Giovanni Pacini; more about these gentlemen in our next episode.