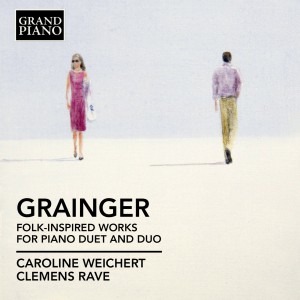 From Grainger: Folk-Inspired Works For Piano Duet and Duo (2012)

Song from the Faroe Islands (Let’s Dance Gay in Green Meadow) for piano duet is based on a folk-tune collected by Grainger in 1905 and variously revised over the next four decades. Against its harmonically ambivalent accompaniment, the main theme emerges as a series of ingenious variants which avoid tonal resolution and make full use of the textural possibilities of the duo medium.

Percy Aldridge Grainger was born in Melbourne on 8th July 1882. He received initial musical training from his mother, making his début as a pianist when only ten, and from Louis Pabst, founder of the Melbourne Academy of Music. He went
to Germany in 1895 where he became a pupil of James Kwast at the Hoch’sche Konservatorium in Frankfurt am Main. 1901 saw the beginning of a career in England, followed by tours to South Africa and Australia. In 1906 he encountered
Grieg, of whose Piano Concerto he became a leading exponent. Settling in the United States from 1914, he made his début in New York the following year and taught at the Chicago Music College from 1919. In 1928 he married Ella Ström at the Hollywood Bowl, and resided at White Plains, NY from 1940. In common with his older contemporary Busoni (with whom he had studied briefly during the 1890s), he found the career of concert pianist increasingly onerous – all the time pursuing a highly individual fusion between traditional music with his own composing, together with research into his equally idiosyncratic notion of electronic music which absorbed an increasing amount of his time from the mid-1930s onwards. Leaving his manuscripts and effects to the Grainger Museum in Melbourne, he succumbed to cancer in White Plains on 20th February 1961.