Composers Anecdotes
How to say, “I do” in style!
Leopold I
by Georg Predota March 21st, 2013 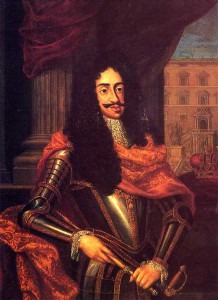 The Holy Roman Emperor Leopold I, son of Ferdinand III was crowned in Bratislava on June 27, 1655. He was barely 15 years old, but already fluent in Latin, Italian, German, French and Spanish. He was also thoroughly educated in the classics, history, literature, natural sciences and astronomy, but just like his father, his real interest was music. As such, it is hardly surprising that for his coronation, which took place during the ceremonial mass, the cathedral resounded with the work of some of the most talented composer’s of his day. Johann Heinrich Schmelzer, one of the most important violinists of the period who made substantial contributions to violin technique and musical form composed the music for the entrance of the teenage king. The five sections of the Mass ordinary — Kyrie, Gloria, Credo, Sanctus/Benedictus and Agnus Dei — were composed by Antonio Bertali, a Veronese composer in the service of the Habsburgs. Bertali had made his name establishing Italian “opera seria” in Vienna, and his contribution to the coronation of Leopold I also included several motets. Additional compositions were contributed by the Viennese court organist Wolfgang Ebner, and also by Antonio Caldara whose fame rested on operatic and oratorio compositions.

Given the magnificent musical splendor of his coronation, who can blame Leopold I for placing music at the centre of the cultural life at court. And he was not shy spending a lot of money on his musical pursuits. Each year, he spent about 60,000 Gulden on his Court musicians; in comparison, a public servant was expected to make 30,000 Gulden in a lifetime! Besides Schmelzer, Bertali, Ebner and Caldara, Leopold I also employed Giovanni Bononcini, Johann Kaspar Kerll, Ferdinand Tobias Richter, Alessandro Poglietti, and Johann Fux among numerous others. And his employees thanked him with almost 400 new works, all composed during his reign. It was customary for newly crowned kings to oversee the construction of a monument or palace to commemorate their ascension to the throne. Leopold I, however, had other ideas and he authorized the building of a grand theatre in 1659. Part of the imperial residence, he employed Lodovico Burnacini to design and oversee construction, which took nearly a year to build and included the latest stage machinery and a number of elaborate sets. 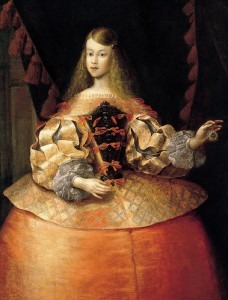 If you think Leopold’s coronation was spectacular, I better tell you about his marriage to Margarita Teresa of Spain in 1666. The festivities lasted almost two years, and commenced with a sparkling firework display that pained colored hearts sporting the initials “L” and “M” into the sky. This was followed by 300 rockets illuminating the mythical Hapsburg sequence “A.E.I.O.U” (Austria est imperare orbi universe — It is Austria’s destiny to rule the whole world.” Part of the marriage festivities included an equestrian ballet “La Contesa dell’aria e dell’acqua” (Battle of Wind and Water) with much of the music provided by Heinrich Schmelzer. It included costumed riders, elaborate allegorical wagons, songs and choruses and a final ballet on horseback in which the emperor and his favorite steed “Speranza” took part. Sporting the latest stage technology of its day, elaborate machinery enabled horses and carriages to soar high into the air. The crowning conclusion of the wedding celebration in 1667 was a performance of the opera “Il pomo d’oro” (The Golden Apple) — which included the participation of live elephants — by Antonio Cesti. For this occasion Leopold had a brand new opera house, seating up to 5000 people, designed and built by Lodovico Burnacini. Cesti, however, could not take all the credit for composing the opera, as Leopold I had also written some music for the work. Having received musical instruction from both Bertali and Ebner, Leopold composed a variety of sacred and secular works, among them roughly 150 arias on Italian texts, a number of German-language oratorios, instrumental sonatas and some musical comedies. He seems to have been most successful with his polychoral liturgical settings, including respective Requiems for his first and third wives, and the Missa angeli custodies, composed for the funeral of his second wife. Leopold passed his love for music — and the crown of the Holy Roman Emperor — first to his eldest son Joseph I, who in turn was succeeded by his eldest brother Charles VI; both were able musicians as well as vigorous supporters of music and the Arts.