The 1920s in Europe became a time of strong nationalism, often covering not just a country but a whole region. Leoš Janáček’s Glagolitic Mass, for example, was his offering to pan-Slavism. The 1926 Sinfonietta, on the other hand, was his ode to Czechoslovakia.

Janáček had been commissioned to write fanfares for the opening of the Sokol Gymnastic Festival and, inspired by a military band he heard, wrote what became the first movement of the Sinfonietta. The Sokol movement was founded in 1862 in the Czech part of Austria-Hungary and followed the principle of “a strong mind in a strong body.” The Sokol provided ‘physical, moral, and intellectual training for the nation’ and eventually became a pan-Slavic movement. The movement took on political associations and was disbanded during WWI. After 1919, the movement grew again and had some 630,000 members by 1930. It was finally suppressed and banned by the Nazis and then later by the Communists, but lives on in immigrant communities, such as in the US. It has also reappeared in the Czech Republic. 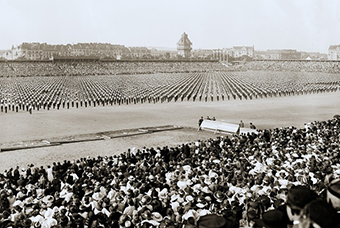 The 1926 Festival, or Slet, that the Sinfonietta was written for was a gathering of Sokols for a mass-gymnastic festival. From the very first Slet in 1882, the opening ceremony was an elaborate event, starting with a welcoming ceremony at the train station, mass demonstrations of gymnastics, speeches and theatrical events. It’s of interest that the Sokol festivals started more than a decade before the modern Olympics in 1896 and parallels can be drawn between the two ceremonies.

Janáček’s work used one of the largest orchestras he ever wrote for, including for the first movement, 9 C trumpets, 2 bass trumpets, and 2 tenor tubas. For the last movement, 3 F trumpets are added.

The first movement Fanfare opening starts with antiphonal responses with a slowly revolving rhythm below it. The trumpets become more animated and then more lyrical, but always bright and brilliant. The support from the timpani does much to permit the trumpet’s lyricism.

The other 4 movements were inspired by buildings and areas in Brno (II. The Castle, III. The Queen’s Monastery, IV. The Street Leading to the Castle, and V. The Town Hall) that came to represent a kind of original ‘Czech’ ideal.

This 1951 recording is led by Václav Neumann (1920-1995), a Czech conductor, violinist and violist who was a particular champion of Czech music, being known for the first studio recording of Janáček’s opera The Excursions of Mr. Brouček in 1962. The Leipzig Radio Symphony Orchestra is the oldest radio orchestra in Germany and one of the oldest in the world, being founded in 1923. This recording is highly idiosyncratic – note the wild trumpet sounds in the first movement – but the drive and urgency to the final movement give the work a genuine national spirit. The work, originally entitled Military Sinfonietta, was dedicated to the Czechoslovakian Army. In Haruki Murakami’s 2010 novel 1Q84, the Sinfonietta is a critical piece of music, appearing to move the heroine of the story between the alternate realities of 1984 and ‘1Q84,’ with 1Q84 being much more militaristic than 1984. 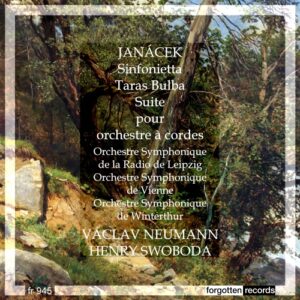