Features
Are you Practicing Your Études?
by Janet Horvath May 12th, 2018 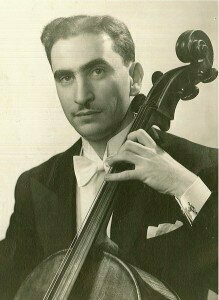 “She plays duets instead of Grützmacher,” my father grumbled. “Janet, practice your études!” My father, trained in the European tradition, knew the benefits, and difficulties, of the strict methods of Dotzauer, Piatti, Klengel, Duport, and Becker, all brilliant cellists and teachers in their day. My daily trial-by-fire, entailed wrestling with the knuckle-busting études and they fought back, or so it seemed. Just looking at a page of Grützmacher was disheartening. How does anyone play these? It was even more intimidating to see my father’s fingerings in the worn edition…

But my étude-playing impressed an advanced teacher who later admitted that he didn’t think anyone as diminutive as I, with tiny hands, would ever be able to play the cello.

Today the above-mentioned cellists are known primarily by countless cello students who have grappled with their études (or avoided them). But these artists set extremely high standards of playing, and taught some of the greatest soloists, including Piatigorsky, Feuermann, Suggia, Mainardi, and Beatrice Harrison, among others. 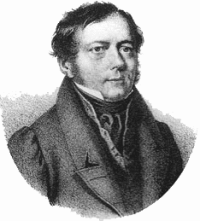 Friedrich Dotzauer (1783-1860) had an unconventional start. His earliest lessons were on the piano and the violin. The local blacksmith taught him the double-bass, Dotzauer picked up the horn and clarinet, the local organist gave him music theory instruction, and the Court trumpeter gave him his first cello lessons! After settling on the cello, he went to study with a student of one of the famous Duport brothers—both wonderful cellists who knew and inspired Beethoven, (and who wrote extremely difficult studies.) Dotzauer joined the Court Orchestra of Dresden eventually becoming the solo cellist. A lover of string quartet playing, he was a member of the distinguished Leipzig Professors’ String Quartet and performed as soloist in Vienna, throughout Germany, and the Netherlands. Reports from the time indicate his intonation was impeccable and his technique flawless.

Dotzauer: Etude in D Major, Op. 158, No. 2: Presto
Although he still played without an end-pin, Dotzauer was the first cellist to advocate holding the bow close to the frog in a relaxed manner as we do today, and to play with a free and natural bow-arm. Due to his influence, Dresden became recognized as a center for the highest caliber of cello playing. As a prolific composer, who wrote an astounding number of symphonies, operas, sonatas, chamber music, and innumerable cello works, which have practically vanished, he is well-known for his Three Violoncello Schools of 113 études, exercises, and caprices for unaccompanied cello. 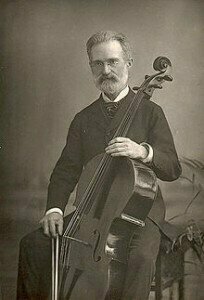 The Piatti Caprices are beautiful, exceedingly virtuosic, and give an indication of the quality of Alfred Piatti’s playing. He was born in 1822 in Borgo Canale near Bergamo. His talent was immediately apparent and Piatti was accepted to the Milan Conservatory by age 10. Two years later he made his debut, and by 1836 he began touring, performing first at La Scala and then several cities in Europe with extraordinary success. When he suddenly took ill, Piatti was forced to sell his cello to pay for food and lodging while he recuperated. On his way home Piatti had the opportunity to appear in Munich with Franz Liszt, with a borrowed cello. Liszt was tremendously impressed with the Italian cellist. The following year, in 1844, Liszt had a surprise for Piatti—several concert engagements in Paris and a gift of a beautiful Amati cello. Piatti made notable appearances in London and Russia. A reviewer gushed about Piatti’s, “developed technique, sonority, pleasant tone, rare purity, refined taste, and abundance of feeling and expression…”

Piatti had a long and distinguished teaching career. The German cellists Robert Haussmann, (who premiered the Brahms Double Concerto and for whom Bruch wrote his Kol Nidrei) and Hugo Becker, William Whitehouse and many others, studied with him.
Audiences of the day had come to expect salon and virtuoso pieces in concerts. Piatti tried to enhance the cello repertoire with artistic and serious works and was the first to publish 18th century sonatas that were forgotten in dusty libraries—works by Locatelli, Porpora, Valentini, Veracini, Ariosti, Marcello, and Boccherini. Cello teachers of today still recommend Piatti’s Caprices.

Friedrich Grüzmacher (1832-1903) first studied with his father who played in the ducal band. When his talent shone he was sent to study with a student of Dotzauer.

After he moved to Leipzig in 1848, he was heard by the famous violinist Ferdinand David who arranged a concert for Grüzmacher—invaluable exposure for the cellist. When Cossmann left Leipzig, Grüzmacher became the principal cello of the Gewandhaus Orchestra, professor at the Leipzig Conservatory, and performed in the David String Quartet. Several years later he took the position of principal of another esteemed orchestra—the Court Orchestra of Dresden, and became the cellist of the Kammervirtuos to the King of Saxony. He toured Europe and Russia and was known for his technical mastery and tantalizing musicality.

Grüzmacher composed and arranged a huge number of methods and pieces, like Piatti, to bolster the cello repertoire. He was one of the first to include sonatas on his programs, by Beethoven, Mendelssohn, Chopin and Grieg.

A formidable teacher, Hugo Becker was one of his many accomplished students. Grüzmacher is known more for his études than his arrangements and transcriptions. He certainly used “poetic license.” His edition of the famous Boccherini Concerto in B flat, still used today, is a compilation of four different works. According to Margaret Campbell in The Great Cellists, “although both Anner Bylsma and Maurice Gendron have researched into the originals and have dared to redress the balance…many modern players are unaware of the inaccuracies in the edited version.” At least Grüzmacher made the public aware of the music of Boccherini! Grüzmacher’s cadenzas for the concerto and the Haydn D Major Concerto are still performed today as are his darned difficult studies.

Fortunately, many of the studies are graduated and are playable for beginners. Are you practicing your études? I am. They are sometimes required repertoire for competitions and auditions.