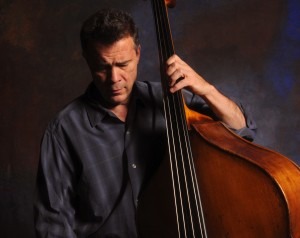 “Classical Crossover” is a relatively new term in music meant to describe musicians who are proficient in classical music but who also perform in other styles and genres. In the baroque and classical era improvisational skills were expected of a musician. In fact, cadenzas—the section where the soloist typically “shows off” alone towards the end of the first movement of a classical concerto, was often improvised. But in the more recent past many classical performers shied away from improvisational styles and were inexperienced in genres such as ethnic, jazz or bluegrass music. The artists who started the trend to expand their palettes have contributed to the versatility of all types of musicians. Today there are several well-known artists experimenting in other styles of music.

Here are two who can be categorized as true classical virtuosos who have become experts in other genres.

Doublebass player and composer Edgar Meyer is a profoundly versatile artist. He has just completed a coast-to-coast U.S. tour performing his Quintet for Strings with the Dover String Quartet. On November 8th he performed a double bill of Bottesini’s Concerto No. 2 and his own Concerto No. 1 for doublebass marking his Hong Kong debut. Other impressive recent achievements have been a new violin and double bass concerto work which was performed with Joshua Bell and premiered at Tanglewood in 2012, a Double Concerto for Bass and Cello that he and Yo Yo Ma premiered with the Boston Symphony Orchestra, Seiji Ozawa conducting, and a 1999 violin concerto for Hilary Hahn, which Hahn premiered and recorded with the St. Paul Chamber Orchestra under the direction of Hugh Wolff.

He went on to study math but quickly switched to majoring in music at Indiana University. A chance jam session began a life-long collaboration with Banjo virtuoso Béla Fleck. Edgar Meyer was a student at the Aspen Music Festival and Fleck was performing with New Grass Revival. They decided to jam in front of Aspen’s Häagen-Dazs shop. Fleck was blown away. Meyer seemed to be able to nimbly play millions of difficult chords and licks. Meyer was soon invited to the Telluride Festival where Fleck and other all stars such as Sam and Jerry Douglas performed. During the 1980’s Béla and Edgar played an annual duo set and by 1985 they and other virtuoso artists made some brilliant recordings including Unfolding and The Telluride Sessions. Meyer has been performing at Telluride for 25 years.

Zigeunerweisen by Meyer and Fleck
“My most cherished memory is the 1985 Telluride All-Stars jam, with Mark (O’Connor), Sam and Jerry (Douglas) and Béla,” he says. “It introduced me to a musical energy I had never felt before.”

The New Yorker has hailed him as “…the most remarkable virtuoso in the relatively un-chronicled history of his instrument.” Meyer’s effortless technique and soulful expressivity have rendered him a unique place in music history—someone equally accomplished in classical, bluegrass, jazz, and composition. His over 20 albums include recordings crossing several genres.. Meyer feels that Bach has been the greatest influence on his composing and in fact, he has recorded all of the solo Bach Cello Suites. In 1995 he recorded the Schubert: Quintet, Op. 114 The Trout with Emanuel Ax, Pamela Frank, Rebecca Young and Yo Yo Ma.

The Goat Rodeo Sessions of 2011 included Meyer, Yo-Yo Ma, Chris Thile on mandolin, and Stuart Duncan on fiddle, which was awarded the 2012 Grammy Award for Best Folk Album.

In an interview for the Bass Musician November 2011 Meyer says in response to the question: “What might you suggest to an enthusiastic young player looking to make his art, his career?

Edgar: “Play piano. Get to know and get involved with people who are better than you are.
Immersion—Create a broad base of knowledge. Get to know the things that influenced the music that you love. Learn all the parts not just your own. Writers need to play, players need to write. Learn to listen, especially while playing.”

Meyer’s prizes include the 1994 Avery Fisher Career Grant. In 2000 he became the first bass player to receive the Avery Fisher Prize and in 2002 the only bass player to be named a MacArthur Fellow. Meyer teaches at the Curtis Institute and the Blair School of Music, Vanderbilt University.

Meyer: Finale from Work in Progress Commissioned for San Francisco Performances, and the Savannah Music Festival 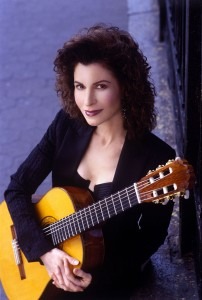 A woman in a man’s world, the “face of the classical guitar”, multiple Grammy award winner Sharon Isbin is one of the most widely respected and recorded classical guitarists. The Washington Post has called her, “a master molder of color, balance, equilibrium and resonance…” Yet still, “There’s a duality as a woman. In the guitar world I always had to fight as a woman. In the music world I had to fight as a guitarist.”

Sharon was born in Minneapolis, Minnesota. Her father, Herbert S. Isbin, a nuclear scientist and professor at the University of Minnesota, was transferred to Italy when Sharon was nine years old. There she was able to get expert teaching. She later worked with Andrès Segovia and the esteemed keyboard player Rosalyn Tureck with whom she prepared and recorded the lute suites for guitar by J.S. Bach.

Isbin has appeared as soloist with an astonishing 170 orchestras and regularly plays to sold-out houses. Her many recordings—over 25— encompass all styles. Recent recordings include Sharon Isbin: 5 Classic Albums and an album featuring rock/jazz artists Sharon Isbin and Friends: Guitar Passions. Her 2010 CD Journey to the New World with Joan Baez and Mark O’Connor was on the top Billboard charts for 63 weeks, and received a Grammy award and her Dreams of a World received a Grammy for “Best Instrumental Soloist Performance”. She was the first classical guitarist to receive the award in almost three decades.

Sharon Isbin & Friends: Guitar Passions
Carinhoso arr. R. Passos and C. Barbosa-Lima for voice, guitar, percussion
Sharon Isbin has dramatically expanded the guitar repertoire with countless new works, commissioning concertos from John Adams, Rouse, Tan Dun, John Corigliano, as well as solo works. She is an exceptionally expressive player and ardent proponent of the guitar. A documentary about her life entitled Sharon Isbin: Troubadour won the ASCAP award and has been an International best seller. She teaches at the Aspen School of Music and founded the guitar department at The Juilliard School.