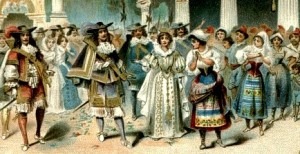 The Théâtre de la Monnaie in Brussels hosted a rather special performance on 25 August 1830. William I, Prince of Orange and King of the Netherlands and Grand Duke of Luxembourg was celebrating the 15th year of his reign, and the opera La muette de Portici (The Mute Girl of Portici) by Daniel Auber was staged in his honor. Politically, things had gotten a bit dicey! After the defeat of Napoleon in 1815, the Congress of Vienna had created the United Kingdom of the Netherlands, which included a number of southern provinces. Catholic bishops in the South viewed the Protestant-majority North with suspicion, and although 62% of the population lived in the South they were under-represented in the States Assembly. A linguistic reform to make Dutch the official language in the Flemish provinces met with strong opposition, and high levels of unemployment led to industrial unrest among the working classes. And as it happened, the announcement of the King’s festival lit the fuse to the start of the Belgian Revolution!

Auber’s revolutionary opera deals with a 17th-century Neapolitan uprising against Spanish rule, led by the fisherman Masaniello, whose mute sister, Fenella, has been seduced by Alphonse, son of the Spanish viceroy. Both sides in the conflict eventually victimize Elivre, Alphonse’s blameless wife and the ensuing power struggle has catastrophic consequences. Prior to the performance of the opera, the Courrier des Pays-Bas newspaper published a coded message for everybody to leave just before the fifth act. Apparently, it all kicked off during the patriotic second act duet “Amour sacré de la patrie.” A contemporary eyewitness reports, “during the duet enthusiasm exploded irresistibly, and the singers found it necessary to start afresh in the midst of the cheering. Finally, when Masaniello launched into his entreaty, the invocation “Aux Armes!,” the public could no longer be restrained, and the delirious crowd stormed out of the hall—into history.” The crowd poured into the streets shouting patriotic slogans, and rioters swiftly took possession of government buildings. After roughly a month of civic unrest the declaration of Belgian independence was issued on 4 October 1830. Richard Wagner famously remarked that “seldom has an artistic product stood in closer connection with a world event.”

Daniel François Esprit Auber: La Muette de Portici
La muette de Portici has been a symbol of Belgian unity since 1830. But to actually see it staged in 2011, audiences had to go to Paris, because it might have aroused political controversy in Brussels. Peter De Caluwe, director of La Monnaie explains, “Staging the opera in 2011, in Brussels, would not only be an artistic act but it would also be a political manifesto and interpreted as an argument in favor of Belgian unity at a moment when the political situation is precarious. It isn’t the right time because it would raise the question of whether or not we need Belgium. I want to withdraw opera from that debate.” Against the backdrop over endemic mistrust between the Flemish and the Walloons—who bickered for months over the formation of a Belgian government—the opera was considered dynamite on the political front, and entirely too hot to handle! A newspaper critic wrote, “if we pull back from performing an opera that led to the birth of our country out of fear of provoking the rage of those who want Belgium to disappear, then this country is already well and truly gone.”