One of the first artists to cross the threshold into world music and jazz was violinist Yehudi Menuhin. In 1966, at a time when sitar music was relatively unknown, Menuhin collaborated with the phenomenal Indian musician Ravi Shankar. “I was extremely nervous at the thought of performing with him. The only time I have ever been as nervous was one Christmas when a BBC producer called to tell me that I would be playing jazz violin with Stephane Grappelli. ‘You love him,’ he said. ‘I do,’ I answered, ‘but I just don’t know how to play jazz.’” Menuhin and Shankar clicked. Their friendship continued for decades as they learned from each other’s work. West Meets East, released in 1967, topped the charts, winning a Grammy. The music of India created a stir and two more albums followed.

Master violinist Itzhak Perlman, at ease in musical genres from Beethoven to Broadway, is one of our unparalleled musical ambassadors, popular with everyone. He has recorded with jazz pianist Oscar Peterson, and both of his widely acclaimed Klezmer albums “Live in the Fiddler’s House,” have received Emmy awards. Klezmer music, which comprises clarinet, violin, flute, accordion, and often guitar, trumpet, keyboard and vocals, played an integral part in the culture of Eastern European Jewry. Influenced by gypsy melodies, Balkan music, Israeli horas and folk music, it is infectious! Perlman’s playing can also be heard on the sound track to the film Memoirs of a Geisha. His gorgeous rendition of the movie theme Schindler’s List composed by John Williams, is much-admired. During the 78th Academy Awards, Perlman performed a medley of the five films nominated for Best Original Score. His many accolades include the 2008 Grammy Lifetime Achievement Award and whatever he plays—classical, jazz, hit tunes or Klezmer, he radiates a deep love for music. 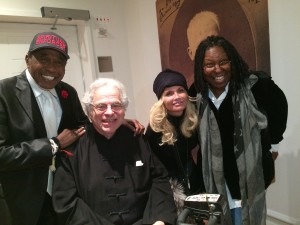 Perlman at the backstage at Carnegie Hall with Ben Vereen, Kristin Chenoweth and Whoopi Goldberg after the November 7 Chita Rivera “Nowadays” concert

The riveting banjo virtuoso Béla Fleck needs no introduction. A winner of 16 Grammys, he has received nominations in more musical categories than any instrumentalist in Grammy history. Named after the eminent classical composer Hungarian, Béla Bartók, he was fated to be a world-class musician. When Fleck heard the banjo playing of Earl Scruggs, that was it! A stunning performer in bluegrass music, Fleck became equally adept in jazz, pop, rock and world music. The 2001 classical music recording Perpetual Motion, a collaboration with double bassist and composer Edgar Meyer, won two Grammys including for Best Classical Crossover Album. Composer, John Williams, percussionist, Evelyn Glennie, violinist, Joshua Bell, and cellist, Gary Hoffman perform with Fleck. The music includes beloved works of Chopin, Doctor Gradus ad Panassum, by Debussy, which won its own Grammy, Paganini Moto Perpetuo, and Beethoven’s Moonlight Sonata. The 20 tracks are enthralling.

Bela Fleck
Paganini: Moto Perpetuo
Fleck and Meyer co-composed a double concerto for banjo and bass, and The Melody of Rhythm—trio concerto for bass, banjo and Indian tabla, played by Zakir Hussain. Fleck also wrote a banjo concerto in 2011, and a quintet for banjo and string quartet, on the Deutche Gramophone label. His bluegrass band the Flecktones still performs. 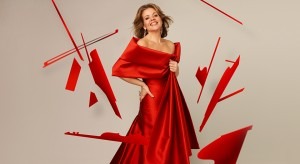 And Renée Fleming, a charismatic presence on the operatic stages and concert halls of the world, who dazzles her audiences with her scintillating lyric soprano voice, followed in Kanawa’s footsteps. Fleming is sought after for her dedication to the standard operatic repertoire and to contemporary music, but also as a host for the Metropolitan Opera’s Live in HD series for movie theaters and Live From Lincoln Center on PBS. The first classical artist to sing the National Anthem at the Super Bowl in 2014, she recently stunned her fans by singing two octaves lower than she usually does. Dark Hope her pop album, features music of Indie bands from the 60s and 70s, which Fleming describes as a “visit to a new, parallel universe.” It’s fabulous! She’s not sure where it all will lead but suffice it to say, last year, she performed with Yo-Yo Ma on the Billy Childs album, Map to the Treasure: Reimagining Laura Nyro. The song, “New York Tendaberry” won a Grammy.

Yo Yo Ma has done more for bringing music of other cultures and genres to the fore than perhaps anyone. He has collaborated with non-classical artists such as vocalist Bobby McFerrin, on the album Hush, and tango composer Astor Piazzolla, on the album The Soul of the Tango. In 2000 Yo Yo extended further. The recordings Appalachian Waltz and Appalachian Journey with Edgar Meyer, bass and Mark O’Connor, violin, attempt to fuse classical music, American traditions of Appalachian, and bluegrass music, and showcases the outstanding talent of the musicians. The albums feature original compositions and standards from the repertoire. Then in 2013, Yo Yo recorded the Goat Rodeo Session with Stuart Duncan, Edgar Meyer and Chris Thile, which won the Grammy Award for Best Folk Album that year. Yo Yo has also appeared on movie soundtracks including Tan Dun’s score for Crouching Tiger, Hidden Dragon.

Yo Yo and The Silk Road Ensemble: Arabian Waltz

Ma’s statesmanship can perhaps be best exemplified in his Silk Road Ensemble, and the recent documentary The Music of Strangers: Yo-Yo Ma and the Silk Road Ensemble, which brings together world-class performers who are dedicated to multicultural exchange. The Silk Road Project says it best, “Curiosity. Creativity. Generosity. Passion. The same qualities that make a Silk Road Ensemble performance great can change our world for the better. That’s why we bring these values off stage too, working to deepen learning and strengthen global understanding.” Unusual instruments from Middle Eastern and Asian nations infuse the music with mesmerizing rhythms and improvisatory melodic lines. Music of all cultures reveals possibility and creates hope.

Yo Yo Ma – The Music Of Strangers – Official Trailer