‘From the outset all manner of unacceptable behaviour, whether manifesting itself emotionally in false rapture or facial grimace, the stamping of feet to mark the rhythm, accompanied by an all-embracing unsightly body movement, the shaking and nodding of the head to and fro, snorting during a trill or difficult passage…..Despite music being perceived solely through the ears, there can be no excuse to offend the eyes with such wild antics being carried on in public. Those musicians who enrapture through their performance perceptibly tend to weaken an otherwise good impression when their caricature-like behaviour either induces laughter in us or their apparent convulsions tend to instil fear and horror amongst the listeners’. 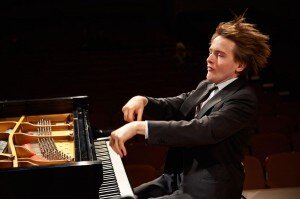 Until fairly recently, junior doctors were not taught “bedside manner” at medical school – how to communicate with patients with respect and empathy; likewise, are aspiring concert soloists taught concert etiquette while at conservatoire or music college? The thought certainly conjures up an amusing image of a roomful of would-be virtuosi being taught how to bow and curtsey properly…

Just as the first piece of a concert is the soloist’s “calling card”, the way the soloist presents him or herself on the concert platform can also set the mood for the rest of the evening. There are many different ways of doing it: continental, especially southern Mediterranean and Easter European performers, seem to favour a deep bow and hand on heart, perhaps expressing the inexpressible even before the music has begun? Russian pianist Elisabeth Leonskaja strides purposefully onto the stage, her bow is a little impatient, as if she is keen to get on with the evening’s work. Canadian pianist Angela Hewitt, on the other hand, has a smile as sparkling as the crystals on her gown and exudes general pleasure at the prospect of sharing music with her audience.

Some of the greatest artists of our time, indeed, of all time, are or were famously miserable: Grigory Sokolov has a reputation for dismissing his audience with a curt nod, as if the audience is an irritation to be borne for the duration of the performance, and in the green room at London’s Wigmore Hall there is a photograph of Rachmaninoff who looks as if he’d do anything but play the piano. Why do artists find it so difficult to acknowledge the audience who, after all, are a critical component of the concert experience? For without an audience, it would not be a concert…. If one’s body language on greeting the audience is negative, then no matter how beautifully, movingly and technically flawlessly one plays, the audience will always feel rather hard done by, perhaps even questioning why they paid good money for such a misery-guts to entertain them!

Then there is the outfit: these days, many male artists have eschewed the traditional virtuoso uniform of white tie and tails in favour of lounge suits, collarless Nehru jackets, smocks, and tee-shirts and jeans. Given that the physical effort of playing Rachmaninoff’s Third Piano Concerto is equivalent to shovelling several tons of coal, I suspect many a concerto soloist would happily play in a vest. Some soloists have developed a very studied and careful on-stage image through their attire: think of Mitsuko Uchida‘s Issey Miyake pleated gossamer-like creations which give the impression of butterfly wings when she moves her arms to play.

It’s not just the outfits that can delight or offend the eyes: it’s the gestures too. I have never favoured extravagantly, virtuoso affectations: they just get in the way of the music. Certain music demands certain gestures and one’s body language can certainly inform the music and help to convey mood and meaning to the audience. But when the gestures are simply for effect, to draw attention to soloist rather than to music, they become irritating or simply nonsensical.

Snuffling and grunting, sighing and humming are other virtuoso habits. I wonder how many piansts are actually aware that they are doing it? I accept that some habits are probably the result of nerves; others are just that – habits, which have become ingrained. A concert pianist friend of mine sighs audibly as he plays; Glenn Gould famously muttered and hummed along to himself and it became an integral part of his musical identity.

Of course such quirks and eccentricities can endear certain performers to audiences, and in general we tolerate such behaviour in exchange for a wonderful, engaging or moving performance.

And when the music truly speaks, through the conduit of the performer, nothing else matters.