The French pastillist Maurice Quentin de La Tour (1704-1788) is known for his portraits of the most famous men and women of his time, including Voltaire, Rousseau, Louis XV and Madame de Pompadour.

He also captured some of the most famous musicians and singers of his time, including the virtuoso violinist and composer Jean-Joseph de Mondonville, who was as esteemed as Rameau as a composer. Mondonville has his violin in hand, perhaps preparing to tune it, but as he’s listening, he’s also checking to see if he has your attention. 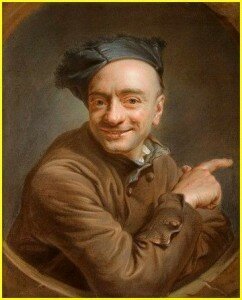 La Tour’s first known portrait, which only survives in a 1731 engraving, was that of Voltaire. At his first major exhibition at the Paris Salon of 1737, his self-portrait shows him laughing and pointing, perhaps at his other picture which was shown next to this one.

A more standard portrait, which still conveys his humour, is this with him in a lace jabot, done around 1751. 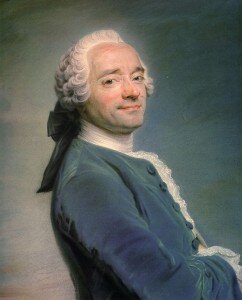 The French singer Marie Fel (1713-1794) came into music through her organist father, Henri Fel. Her older brother Antoine was a composer and a baritone singer. She made her debut at the Paris Opera at age 20 and sang in Paris for the next 35 years, which meant singing in all the operas of Rameau and the revivals of those by Lully and Campra. She retired from the stage in 1758 but continued to sing at the Concert Spirituel, a public concert series held during Lent when the stages were closed, for another decade.

One of the first operas in which she appeared was in the title role of Rameau’s Les fêtes de’Hébé in 1739 and through 1754. By 1740, Rameau was writing expressively for her as the lead. 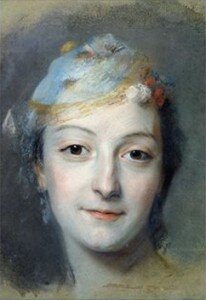 In 1749, she was singing the role of Amélite in Rameau’s Zoroastre, and a revival of that opera in 1756 , with its setting in the Near East may have been the occasion for La Tour’s first portrait of Fel. This is just a study for the now-lost painting, but it captures her unusual face in a style very different from the usual portraits of the period. Her oval face, slender nose are striking, but it is her brown eyes that capture the viewer. 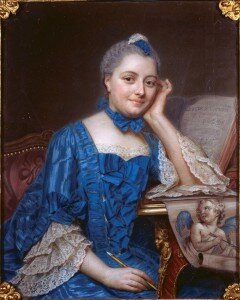 The first person those eyes captured was Louis de Cahusac, who had been the librettist for Zoroastre. Their affair was kept quiet and they maintained separate residences, but lived next door to each other. Others sought her favours but she had a reputation for her constancy. This, unfortunately, did not prevent Giacomo Casanova from libelling her in his autobiography, Histoire de ma vie. Casanova tells of visiting Fel in Paris in 1750 and seeing her with three lovely but dissimilar looking children. Fel, according to Casanova, said they were all hers, but all by different fathers. This story by the famous Italian lover was false, but that hasn’t kept biographers of Fel from asserting its truth.

Fel and La Tour became friends by 1750 and he replaced Cahusac in her affections. When they met, he was 46 and famous and she was 37 and equally famous. Their friendship, or perhaps more than friendship, lasted for more than 30 years and was publically recognized, although not by the church.

In 1753, she sang in Rousseau’s pastoral comic opera Le Devin du Village, with stage-set and costumes were designed by Boucher. The opera was highly successful both then and at its revival in 1765.

It is thought that La Tour might have done many portraits of Marie Fel, but only one other survives. This picture, date unknown, was only discovered in 1993 when it came up for auction. It had been owned by one of La Tour’s closest friends and hadn’t been seen in over 200 years. This half-length portrait shows her, pen in hand, before a score entitled “Les yeux de l’amour.” On the music page, the bass clef is empty, so perhaps Marie Fel will be filling in the missing bass line. It is thought that the music is by her older brother Antoine.

Of note here is the scroll that has rolled open off the edge of the table, he, with ‘les yeux de l’amour’ is looking at Fel. A message of love from the artist to his mistress, made plain in this portrait. She seems, as she was described, good-natured and amused.

The accession of Louis XVI and Marie Antoinette in 1774 meant the end of La Tour’s and Fel’s generation. Tastes in art and music changed and La Tour was instantly out of style. La Tour went into a mental decline and died in 1788 in the care of his family. Fel wrote to him to the end.