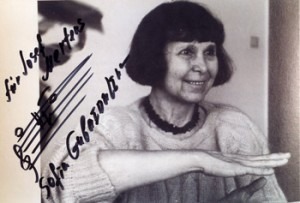 Sofia Asgatovna Gubaidulina, born on 24 October 1931 in Tschistopol, a small town on the Volga in the Tartar Republic of the USSR, has never been in doubt about her personal and musical identity and convictions. “I am a religious Russian Orthodox person,” she writes, “and I understand religion in the literal meaning of the word, as ‘re-ligio,’ that is to say the restoration of connections, the restoration of the ‘legato’ of life. There is no more serious task for music than this.” And it is this profound spirituality that informs much of her artistic process. A number of small musical symbols, primarily expressed in intervallic and rhythmic relationships, are constantly searching for deeper musical and mystical meanings. Her unique artistic language of expression is based on a composite of intuitive choices that amalgamates unique sounds and techniques within a traditional musical structure. For Gubaidulina, rhythmic ratios are not limited to local figuration. Rather, “the temporality of the musical form is the defining feature of rhythmic character.” Traditional tonal centers and triadic structures give way to pitch clusters, and chromatic space is constantly competing and reaching for diatonic space, representing a “progression from darkness to the divine.”

Gubaidulina first graduated from the Kazan Conservatory in 1954 with degrees in composition and piano, and later transferred to the Moscow Conservatory. She embarked on a highly individual path that would significantly diverge from the traditional compositional style in Russia. When she finished her studies in 1961, Soviet authorities had already marked her as an “irresponsible” composer on a “mistaken path.” Although Dimitri Shostakovich became one of her most ardent admirers and enthusiastic supporters, she was eventually blacklisted and denounced for producing “noisy mud instead of real musical innovation.” However, Gubaidulina wrote, “Being blacklisted and so unperformed gave me artistic freedom, even if I couldn’t earn much money,” she says. “I could write what I wanted without compromise.” She did earn her money writing film music scores, but devoted several months a year to her own music. During this period of experimentation, strikingly original composition—Concordanza, the Concerto for bassoon and low instruments, The Hour of the Soul and the exceptional De Profundis—began to forcefully emerge.

In the late 1970’s music became an all-important escape from the socio-political atmosphere of the Soviet Union. And as a result, her essentially religious temperament became more and more pronounced in her work. In compositions like Introitus, the Violin Concerto for Gidon Kremer, the Offertorium and the Seven Words—published under the title “Partita”—Gubaidulina strongly associated music with human transcendence and mystical spirituality. The Last Judgement, Alleluia and the colossal Passion according to St. John musically capture the longing inside the soul of humanity. However, Gubaidulina has also experimented with electronic music and improvisational techniques, and much of her recent work reflects her fascination with ancient principles of rhythmic proportions. Since 1992, Gubaidulina has lived an almost solitary life in a small village outside Hamburg, Germany. She had received numerous awards and commendations, ranging from the Kazan Conservatory to the American Academy of Arts and Letters and to Yale University. She is also a member of the musical academies in Frankfurt, Hamburg and the Royal Swedish Academy of Music. In 2013, Gubaidulina became the recipient for the Golden Lion for Lifetime Achievement for Music at the Biennale die Venezia. Working on a huge number of commissions, the composer explains, “Whatever I write is just an attempt. For us human beings nothing is ever realized as we imagine. What we do is just attempts.” Without doubt, Gubaidulina is rightfully considered one of the most important composers alive today.