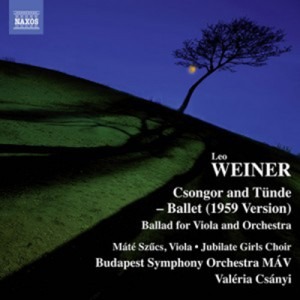 For over half a century at the Liszt Academy in Budapest, Leo Weiner taught successive generations of Hungary’s leading musicians, and won his country’s highest awards. As a composer his career was comet-like in its early brilliance and his music marked by an imaginative use of colour, masterful instrumentation and lyrical emotion. He regarded Csongor and Tünde as his magnum opus and its incidental music was later to take independent form as a ballet, heard here in its final 1959 version. The impressionistic Ballad, Op. 28 for viola and orchestra derives from an earlier work for clarinet and piano.