a psychological force that stimulates an individual to attempt independently,
in a focused and persistent manner, to solve a problem or master a skill
or task which is at least moderately challenging for him or her. 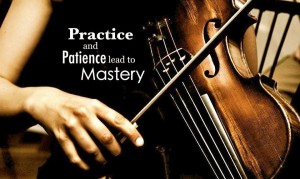 Mastery is about fulfilling your own intrinsic potential. It is not simply the commitment to or achievement of a goal but rather a constant pursuit. “It’s about the journey not the destination” is a neat platitude that is often quoted in the aftermath of a failed exam or missed goal, but it is relevant to the process of mastery for which the actual point of arrival may be quite elusive. Specific goals can be curiously anti-motivational: if all your effort is focused on a single goal, what else is there to work for when that goal has been reached? Mastery, in contrast, is an ongoing process – a process which can provide immense satisfaction, stimulation and surprising creativity.

We are all capable of mastery. In his book on the subject, Robert Greene explains how the attainment of mastery is hard-wired into us, the result of our evolutionary development, a dogged and persistent acquisition of skills through which our ancestors learned the necessary expertise which enabled them to survive and rise to the top of the food chain. Thus the “intensity of effort” required to achieve mastery is genetic and is driven by a powerful inclination towards a particular subject.

Those who achieve mastery are not necessarily geniuses or former child prodigies, nor highly talented individuals or those with a high IQ. Creativity and brilliance do not come from nowhere but rather from a passion for one’s chosen subject combined with persistence and determination and an intense desire to learn.

Mastery is about embracing the role of the life-long student and dedicating oneself to the pursuit of excellence. It is the commitment to really stick with something – be it music, writing, chess, tennis – until we excel at it. The moment at which we believe we have attained excellence is ambiguous; as such, it has no fixed end point, and it is this ambiguity which drives the continual pursuit.

Masters are not experts because they take a subject to its conceptual end.
They are masters because they realize that there isn’t one
– Sarah Lewis, ‘The Rise’

What Mastery is not

Mastery is not about perfectionism, which is an artificial construct, an ideal as opposed to a quantifiable reality, and as such an impossibility. No matter how hard you practice the fine motor skills involved in playing a musical instrument there is still no guarantee that you will never make a mistake. Mastery is the pursuit of excellence – and for the musician, it is about appreciating and accepting our own fallibility, enabling us to learn from our mistakes and to draw satisfaction from incremental improvements and marginal gains, rather than large, potentially unattainable goals. 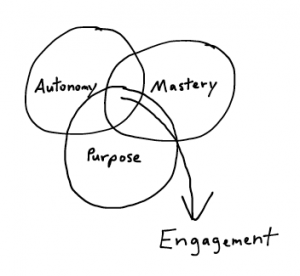 The acquisition of Mastery

For the musician seeking mastery, the first step on the path is identifying your lifelong passion (music), then undertaking an “apprenticeship” (or becoming a student) and finding a mentor or teacher to guide you. It is a simple process, accessible to us all, but only if we are willing to commit time and effort to it.

Mastery comes not simply from 10,000 hours of practice, but from 10,000 or more hours of deliberate, intelligent, thoughtful, self-questioning practice. During this process, basic skills are acquired, which allow us to take on new challenges and make connections which were previously elusive. Gradually, we gain confidence in our ability to problem-solve or overcome weaknesses, make more profound interpretive or artistic decisions about our music making, and at a certain point we move from student/apprentice to practitioner. Now we have the confidence to try out our own ideas while gaining valuable feedback in the process, and our growing knowledge and skill allow us to become increasingly creative, and bring our own individuality and personal style or flair to the task.

Such finesse or craft takes inordinate amounts of work – concentrating on very short sections of the score, seeking feedback from intense self-monitoring, at all times remaining curious and open-minded – but this approach provides us with accountable personal validation methods that put us on the path to mastery.

The ability to work independently, without a teacher acting like a coach running alongside us with megaphone encouraging us to let go, play more freely, play more simply, to get the notes right, is crucial in the acquisition of musical mastery. Much of this independence comes from confidence and the ability to recognise one’s own strengths and weaknesses and to act upon them. But it goes further than that: the musician acquiring mastery does not look for approval from colleagues, the public or the media. Instead one seeks approval from the music itself, by living with it and in it. Thus we take ownership of the music by recognising the value of what we have to say, rather than imitating more senior or more advanced musicians or acclaimed recordings, or constantly referring to a teacher or mentor for approval.

As you grow older, converse more with scores than with virtuosi
– Robert Schumann

When we practise we should do so actively and creatively with joy, playfulness and spontaneity, appreciating every note, every sound, the feel of the keys beneath the fingers, the way the body responds to the music, the nuances of dynamics (both indicated and psychological as the music demands), articulation, expression, and so forth. In short, our music making should be an ongoing, responsive process of discovery and refinement, rather than one of predictability, averageness or “good enough”.

‘Failure’ and the ongoing quest

Often “failures” or errors occur because our focus becomes too narrow and we forget to look at the bigger picture: perhaps we are obsessing about a small section of a piece of music we are working on rather than standing back to consider the piece as a whole, its landscape, narrative and choreography. As our music becomes more “embodied” within us, so we become more adaptable.

To carry with us always the sense that our musical study is an ongoing process, that despite many performances a piece can never really be described as “finished”, encourages a growth mindset and a forward-looking, open-minded attitude – another crucial aspect of mastery.

A person’s errors are his doorways of discovery
– James Joyce

As our authority and autonomy in our music making grows and our confidence and self-reliance deepens, we become more insightful, more aware of what needs to be done next, learning always from what we have already done (and not done), created and built. We reach a state where the divide between intention and realisation has been narrowed such that they become one and the same.

The musician’s life requires courage, patience, persistence, empathy, openness, the ability to deal with rejection; the willingness to be alone with oneself and to be kind to oneself; to be disciplined, but at the same time, take risks; to be spontaneous and playful, yet able to submit to a daily routine; to be willing to fail – not once, but again and again, over the course of a lifetime. For those willing to embrace this life, the road to mastery becomes one of discovery and continuous self-improvement leading to deep and lasting personal fulfillment.

The Rise: Creativity, the Gift of Failure, and the Search for Mastery by Sarah Lewis (Simon & Schuster, 2015)

An Absorbing Errand: How Artists and Craftsmen Make Their Way to Mastery by Janna Malamud Smith (Counterpoint LLC, 2013)