In Tune Arts
Martin Luther and the Impact of the Reformation on Architecture, Art and Music
by Ursula Rehn Wolfman November 12th, 2017 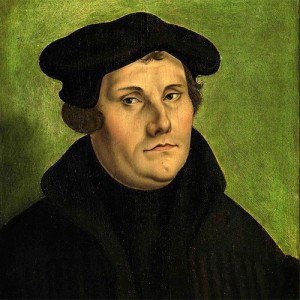 Five hundred years ago, on October 31, 1517 Martin Luther supposedly nailed his Ninety-five Theses to the doors of the Schlosskirche (Castle Church) in Wittenberg, railing against Catholic Church corruption (in particular against the ‘Sale of Indulgences’) dividing Christianity, and igniting the Protestant Reformation. Many fortuitous events, such as the protection of Frederick the Wise, Elector of Saxony, as well as the support of other German princes, the invention of the Guttenberg’s printing press, Luther’s friendship with the court painter and printer, Lucas Cranach the Elder, supported him in his endeavors and facilitated the spreading of his message. 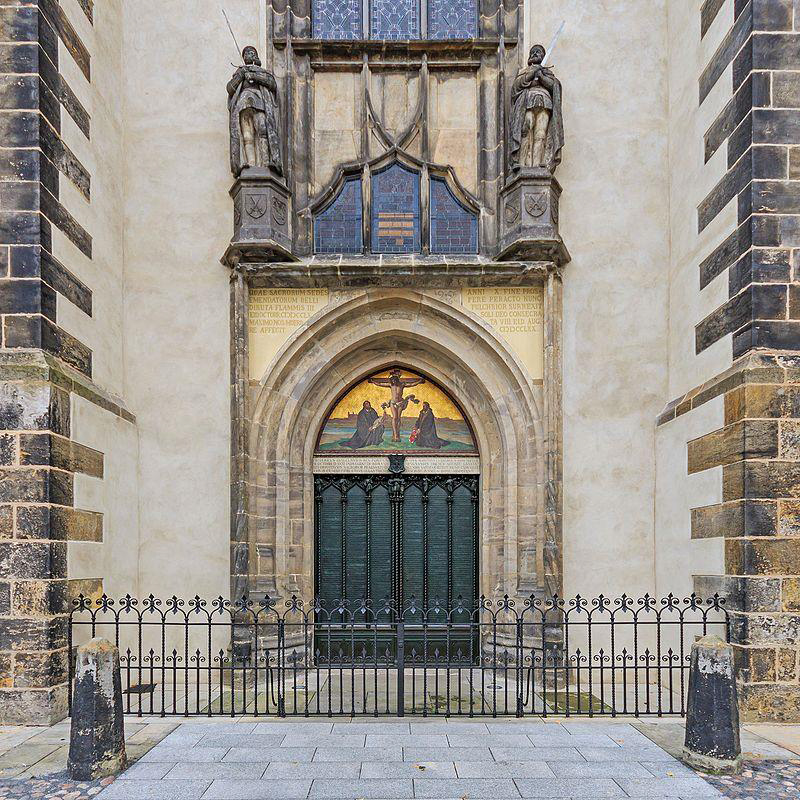 Luther’s translation of the New Testament into German made it not only possible for a wider audience to read the text, but it also became the standard for the German language. In fact, for many, it was the only book owned, which was then also used as a primer to teach children how to read. 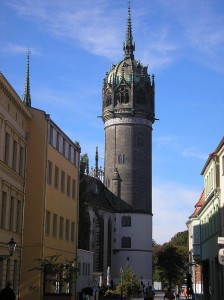 According to contemporary sources of his time, Luther was a powerful orator, using alliteration (‘Der Herr ist mein Hirte/ The Lord is my Shepherd’) and repetition in his sermons — a tradition deriving from his religious order, the Hermits of Saint Augustine. These monks, rather than living secluded in monasteries, were preaching friars, living within their communities, and preaching in their respective colloquial languages rather than Latin. Luther became famous not only through his oratories, but also as a composer of many hymns, sung in German, of which one of the most famous is ‘Ein feste Burg ist unser Gott’/A steadfast castle is our God).

Luther considered these hymns important for his congregation in that they would foster the development of faith, since ‘sola fide/by faith alone’ and ‘sola scriptura/by scripture alone’ became the basis of his belief that only the Bible — now available in German to all — could tell the truth. 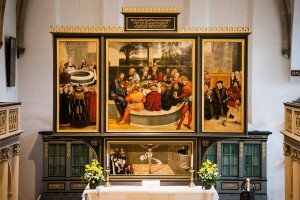 His hymnal compositions were based in part on important Church holidays (Advent, Christmas, Easter, Pentecost, etc.), in part on various topics of the catechism (the Ten Commandments, the Lord’s Prayer, the Eucharist), and in part on psalms and secular songs taken from German folksong tradition. They were also an inspiration to Johann Sebastian Bach, who composed many simple hymns suited for congregational use. In his compositions, such as in the Saint Matthew and Saint John Passions, Bach alternates from chorus and orchestra with these simple choral melodies, creating a dialogue between orchestra, singers and the listening public. 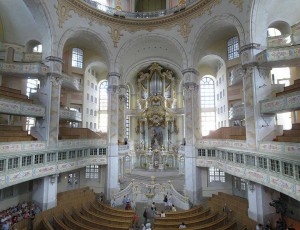 Interior of the newly rebuilt Frauenkirche in Dresden

With the Reformation, the architecture and art of Protestant churches changed, as they were now devoid of religious decoration, of statues, representations of saints, relics and of traditional screens which had separated the nave with the praying public from the choir and altar area, where priests and monks celebrated mass. The subject matter of paintings created during the Reformation changed as well.

As can be seen in Lucas Cranach’s Altarpiece, the iconography of the Reformation is depicted — on the left panel, the sacrament of Baptism, in the center, the Last Supper of Christ (the Communion), on the right panel, the sacrament of Confession and in the Predella panel, Christ on the cross centrally placed, with Luther himself preaching to his followers, including his wife Katharina and his children. 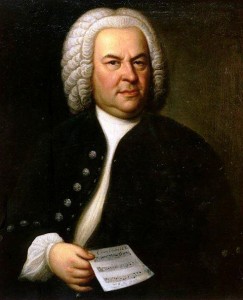 In response to the upheaval of the Reformation, the Catholic Church also started to reform, using Ignatius of Loyola’s the ‘Spiritual Exercises’ as a basis — becoming the Counter-Reformation, the age of the Baroque, generally considered as the period between 1650 and 1750. The Protestant Frauenkirche (Church of Our Lady) in Dresden, built between 1726 and 1743, is a testimony to the new concepts in Baroque architecture, i.e., a basilica type construction with no religious iconography, with perfect acoustics for the organ centrally placed behind the altar, and close to the pulpit and the congregation — a perfect setting for the works of one of the most important Baroque composers, Johann Sebastian Bach.