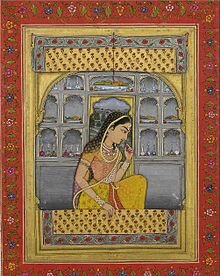 During his honeymoon journey to India, Albert Roussel visited the ruined city of Chittor in Rajputana, currently located in Rajasthan. That city had a very colorful and long history, and once he returned home to Paris he approached his friend Louis Laloy to write a libretto based on the story of the legendary queen of Chittor, Padmâvatî. Her story had been preserved in a medieval poem by Malik Muhammad Jayasi and turned into the novel La légende de Padmanî by Théodore-Marie Pavie. Set in 13th-century India, the plot centers on the princely ruler Ratan-Sen and his beautiful wife, Padmâvatî. When the Mongol sultan Alaouddin—ruler of Delhi—besieges the city of Chittor, he asks to be granted a glimpse of Padmâvatî in exchange for peace. Ratan-Sen reluctantly agrees, and when Padmâvatî unveils at his request, Alaouddin instantly falls in love with her. 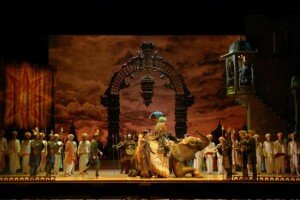 Alaouddin demands that Padmâvatî be handed over to him or he will destroy the city and kill all its citizens. Ratan-Sen refuses the request and the Mongols attack the city. Overwhelmed, the wounded Ratan-Sen and Padmâvatî take refuge in the temple of Siva, and he tells his wife that the people will be massacred unless she gives herself to Alaouddin. Ratan-Sen is eventually stoned to death, and Padmâvatî joins him on his funeral pyre rather than giving herself to Alaouddin. Whether this story is rooted in fact or not was inconsequential for the composer. For Roussel, Padmâvatî represents the culmination of his fascination with India. He did not set out to imitate Indian music, but wanted to musically narrated the dramatic story. He does integrate aspects of Indian modal language into his personal harmonic style, and the first performance, at the Paris Opéra on 1 June 1923 was a considerable success. However, given the lavish nature of the stage requirements as well as the musical technical demands, it was clear from the very beginning that subsequent staging would be rare. As such, Roussel prepared two suites corresponding to each of the acts in 1924.