Composers Anecdotes
Why We Owe “The Flying Dutchman” To A Dog
by Emily E. Hogstad July 16th, 2016 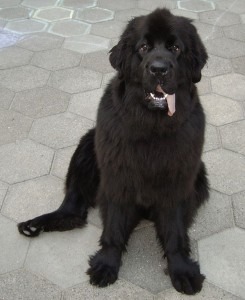 Robber, the giant Newfoundland dog, took to the pit with his master, Richard Wagner.

The twentysomething conductor and composer had recently won a job as music director of the Riga opera, and his dog Robber frequently joined his master at work. At one rehearsal, a bass player accidentally poked Robber in the eye with his bow as he was playing. Robber snarled; the bass player yelled. Wagner, unperturbed, answered, “The dog is a fine critic. He is merely telling you that playing this passage requires more delicacy.”

Robber had slobbered into Wagner’s life by accident. The big black dog used to live in a shop in Riga, and Wagner used to visit him. It wasn’t long before Robber fell deeply in love. At one point, Wagner traveled to the city of Mitau for work, so Robber sat his 160 pound bulk outside Wagner’s door and waited for his idol’s return. The pining dog was so pitiful that Wagner’s landlord actually sent Robber to Mitau. Wagner was deeply moved that the giant shaggy dog had shown such devotion. He wrote in his autobiography, “I…swore to myself, despite all complaints, never again to turn him away.”

Robber had chosen his target wisely. Wagner had a weak spot for dogs and for animals in general. As a child, he and his sister had rescued unwanted puppies from being drowned. As an adult, he would become a vegetarian and antivivisectionist. 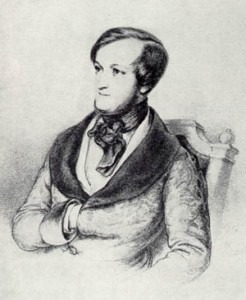 Unfortunately, Robber was the best thing that happened to Wagner in Riga. Two years into his tenure at the opera, Richard and his wife Minna were drowning in debt. His passport had even been confiscated. To avoid jail or exile (or worse), Richard hatched a daring escape plan…that included provisions for his dog! The Wagners’ ultimate destination was Paris, a city where Richard was confident he could find professional success.

The great escape began in the summer of 1839. Robber proved his devotion by running alongside the Wagners’ carriage, his black fur burning in the summer sun. Once they got to the border, Richard and Minna made a run for it during a change in sentry. Remarkably, Robber dutifully followed along, not making a sound. If he had barked and drawn attention to the fugitives, the guards would have shot them all, and the entire history of music would have been a very different thing.

To get from Prussia to Paris without having to abandon Robber, the Wagners hit on a roundabout route. Taking a carriage that distance with a 160 pound dog was impossible, so they decided to sail to London and then travel to Paris. At Pillau, they surreptitiously boarded a ship bound for Britain (somehow they hauled Robber up the side). The voyage began easily enough, but eventually their ship ran into dangerously bad weather. Richard, Minna, and Robber were cooped up in the captain’s cabin. Sailors came staggering down the staircase to fortify themselves with brandy. A seasick Robber barked, slobbered, and vomited. Amazingly, the turmoil of this disgusting voyage served as inspiration for Wagner’s The Flying Dutchman. 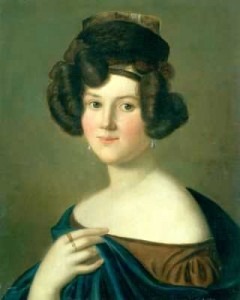 Der fliegende Hollander (The Flying Dutchman)
Miraculously, the little family arrived intact in London in early August. Wagner wrote of the landfall, “We became pleasurably giddy.” While searching for a hotel room, they were crowded into a hansom cab, “designed only for two passengers to sit opposite each other, and in which we had to place the huge dog across our laps and sticking out both windows.” After the cramped ride, a disgruntled Robber disappeared at the hotel door. The Wagners were devastated, convinced their dog was lost forever – how would he ever find his way home in a strange city, in a strange country? – but a couple of hours later, they caught sight of their big black dog out the window, ambling toward their hotel. Robber had returned.

The good news: they all got safely to Paris. The bad news: they didn’t stay together long. The evidence is murky, but apparently Robber ran off. (Although Wagner, with his penchant for the dramatic, thought he was stolen.) A year later, Richard was crisscrossing Paris, meeting with creditors and trying to pay off bills, when he caught sight of his long-lost dog. Richard was sure Robber recognized him. But the dog regarded Richard warily, and every time they got close, Robber would slip away. An exhausted Richard finally had to give up his pursuit.

That afternoon in Paris was the last time canine and composer ever saw each other. But later in life, in honor of Robber, Wagner acquired another black Newfoundland named Russ. Russ is buried right next to Richard, providing companionship to the great composer even beyond the grave.