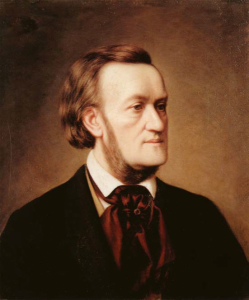 Richard Wagner (1813-1883), not for the first or last time in his life, had to flee his creditors in 1839. His employment in Riga had left him and his wife Minna heavily in debt, and police officials had even impounded their passports. There was only one sensible solution; run away under cover of night! As such, Wagner, his wife Minna and their dog Robber clambered through a ditch in the dead of night and eventually reached the Prussian port of Pillau. From there, they were smuggled on board a small merchant vessel bound for London. With weather forecasting in its infancy, the vessel sailed straight into a mighty storm. With the terrifying shouts of the crew echoing around the granite walls of a Norwegian fjord, everybody believed that the end was near. As we all know, the boat did not sink and in his autobiography Wagner claimed that this harrowing sea crossing provided the original inspiration for The Flying Dutchman.

Legend of The Flying Dutchman

There is no hard evidence to support Wagner’s claim, but we definitely know that he based his opera on an episode in Heinrich Heine’s The Memoirs of Herr von Schnabelewopski published in 1834. In that story the narrator goes to a play about the famous nautical legend of the Flying Dutchman, doomed to eternally sail the oceans until he can be saved by the faithful love of a women. In his rewrite, Wager removed all elements of satire and focused on the theme of redemption through love. Musically, it foreshadows his later music dramas as he uses a number of leitmotivs associated with specific characters and themes. These leitmotivs are introduced in the overture, beginning with the storm motif and leading to the musical tags associated with the Dutchman and Senta. Wagner himself conducted the premiere on 2 January 1843 in Dresden, and he specified that the work was to be performed without intermission.