The household is in an uproar – the cat is at the meat, a bottle is broken on the floor, a heavy book is being trodden on, the backgammon board is overturned, a pocket watch lies open, and the lute has many broken strings. Clearly all is not right in the world. The maid pours the mistress another glass of wine, while holding hands with the master of the house out of her sight. A boy teases a sleeping woman with a twig and the other boy deals with a beggar at the door. Above the table are symbols of a less salubrious future: a basket with the bottom missing holds a beggar’s crutch and money can, a set of leper’s clappers, a sword, and a pair of darkened glasses. An unlucky jack of spades is intertwined in the ribbon supporting all of this.

The fabrics are rich, with fur lining the mistress of the house’s wrap, the master of the house in a velvety clot with many gold buttons at the sleeves. Both the maid and the mistress wear pearl earrings. 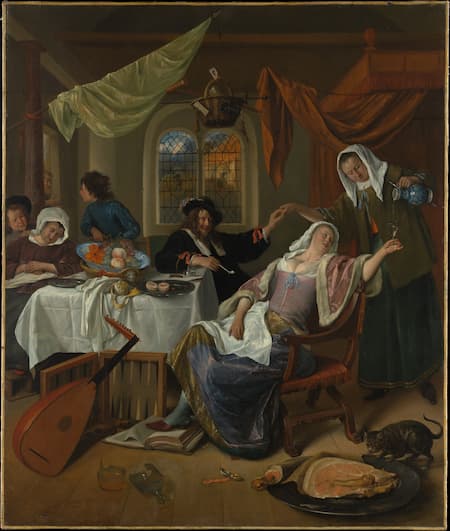 
The man in the center of the picture is the artist himself, and he was so famous for pictures of

The lute not only has missing strings but also missing tuning pegs, showing that even if a master or mistress were able to organize the house, some of the fundamental elements are already gone.

In another Jan Steen picture, the floor is again full of disregarded articles. The dog is at the meat, a hat and cards are on the floor, the discarded oyster shells are enormous, the bread and cheese on the floor are soiled. Behind, the roast has fallen into the fire, the old woman is having her pocket picked as she sleeps, the master of the house has his leg in the woman’s lap as she holds her brimming glass up. The children play, unwatched by anyone. Behind, the fiddler with his lyra da braccio is dancing with the maid who holds a stolen necklace in her hand. On the left, a monkey is playing with the clock weights, stopping time. Above the table again are a beggar’s cane, the leper’s clappers, and several swords. 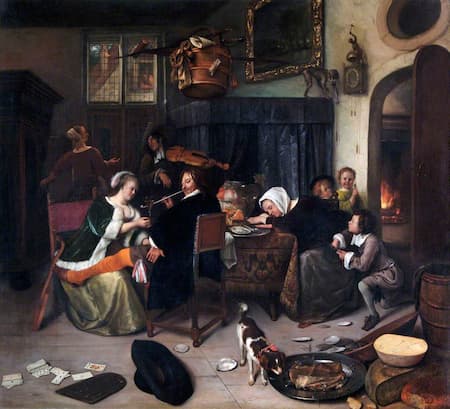 
For Jan Steen (1626-1679), the story was the important part of a painting. He was one of the leading genre painters of the 17th century, in the Dutch Golden Age. Genre paintings shows everyday life with people engaged in daily activities (as a contrast with history paintings that showed known people doing extraordinary things known from history). Steen was born in Leiden and trained there with Jan van Goyen. He married van Goyen’s daughter Margriet, with whom he had 8 children.

In this painting, entitled ‘As the Old Sing, So Pipe the Young’ the bad habits of the elders are being passed down to the children. Steen shows himself teaching the children how to smoke. Wine also figures in this picture and a curious mix of music. On the left side, we have natural music: song birds, and on the right side, we have the old woman singing from a song sheet, and a bagpiper playing. The clothing is rich, with lace, velvets and furs, but the actions are not – bagpipes are an outdoor instrument, the food is disregarded on the table, and the children are being taught through bad examples. 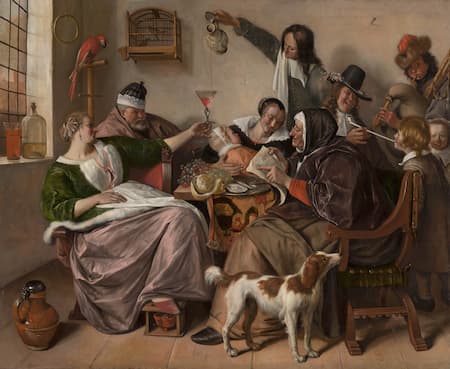 
Musical instruments figure in each of these pictures: one in a broken-down state, indicative of a lack of care; one being played to seduce the thieving maid; and the last as inappropriate for an indoor setting, confirming the chaos of the household.