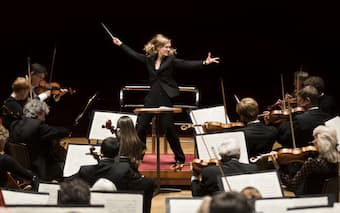 Mirga Gražinytė-Tyla is, without doubt, one of the most in demand conductors and music directors of our times. Gentle, strong, calm and self-confident, she proudly says, “The only thing that could ever stop me is my own lack of imagination.” At the age of 30, Gražinytė-Tyla was unanimously selected by the City of Birmingham Symphony Orchestra (CBSO) to be their musical director following in the footsteps of Andris Nelsons and Sir Simon Rattle. Already in 2017 she was named “the most influential foreign talent in the area of symphony orchestras, as someone whose personality had shaken Europe.” And a Lithuanian music critic writes, “She is a master of emotion and a conductor who always remembers her roots and reminds others of their own. Mirga Gražinytė-Tyla has become yet another striking and inspirational example of how extraordinary creative abilities transcend national borders.” After five years in Birmingham, Gražinytė-Tyla is stepping down and plans to enjoy her life “as a simple freelancer. I think I need time where I am not studying or conducting or traveling or rehearsing to just be a whole human being.” 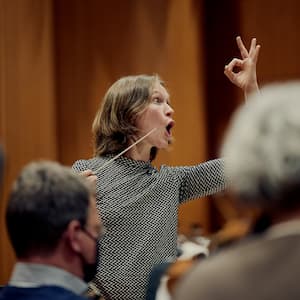 Mirga Gražinytė was born on 29 August 1986 in Vilnius, at that time the Lithuanian SSR, into a highly musical family. Her father is a choir conductor affiliated with the Aidija Chamber Choir in Vilnius, and her mother a pianist and singer. Her musical lineage traces back to her grandmother who was a violinist. Not to be outdone, her great-aunt was a composer, and her great-uncle an organist. She received her initial education in French and painting, and studied at the National M. K. Čiurlionis School of Art in Vilnius. Mirga remembers how she became a conductor. “This is a little bit of a funny story. Although being so surrounded by music, my parents thought their first kid should rather have a secure profession, so they didn’t let me learn anything except a lot of singing. I was 11 when I said, wait a minute, I can’t imagine anything for my profession, only music… When 11 you are supposed already to be a little Mozart, and I was only able to sing. So the only chance for me to enter that special school was to try for choral conducting. So I did that, and I continued.” 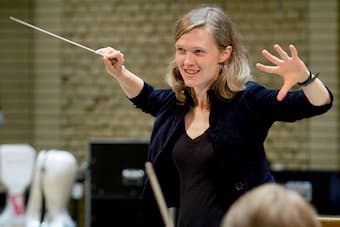 Gražinytė conducted her first choir at age 13 and subsequently continued her music studies at the University of Music and Performing Arts in Graz, earning her degree in 2007. Additional studies took place at the Music Conservatory in Leipzig and in Zurich. She added the word “Tyla,” Lithuanian for silence to her family name to form a professional name. “The name was actually just a rather childish thing,” she explains. “The original idea was to choose a new one in the belief that a name always gives us some characteristic of that name.” Gražinytė-Tyla was quickly appointed Second Kapellmeister at Heidelberg, and in 2012, she won the prestigious Nestlé and Salzburg Young Conductors Competitions. During the same year, she was a Gustavo Dudamel Fellow of the Los Angeles Philharmonic, and in 2014 Gražinytė-Tyla was named the orchestra’s assistant conductor, on a 2-year contract. She is frequently asked about her experiences and challenges of being a women conductor. “I think in the 1950’s we barely had any women in orchestras, women musicians, and this is not at all the case now,” she explains. “And I have to say, doing what I do, I feel like a musician… and feel like a growing human being… I am not thinking, I am a woman, how should I act or do this or that.” 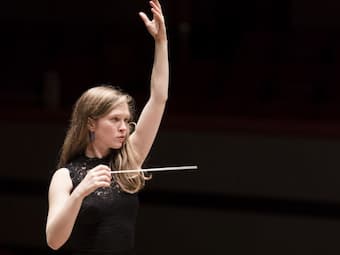 Mirga Gražinytė-Tyla strongly believes that all the music, the greats of classical music and their complex scores “can probably be reduced to two origins, singing or dancing, practices which come from the most archaic needs of human beings.” And the most important element of music, according to Gražinytė-Tyla is “communication with the composer, either dead or alive, with the musicians, and with the audience. And I think this might be the crucial function also of music, to connect us.” For Gražinytė-Tyla the “incredible power of music can influence and infect us all. We’re not just receiving the immediate emotions from these works, those things that come straight away to your ear, but also the codes the composers put into their songs, the ones you only get after endless research. It not only enriches you, it really lets you grow.” Mirga Gražinytė-Tyla credits a conversation with violinist Gidon Kremer for focusing her career vision. She recalled him telling her that her career would always feel like it had two different doors. Behind one would be record labels, managers, festivals and a variety of conflicting demands; behind the other, “all your dreams are there, and your imagination, and the things you can go for and explore.” In the end, it seems, Mirga Gražinytė-Tyla has opened both doors simultaneously.

Mirga Gražinytė-Tyla at the 2016 BBC Proms