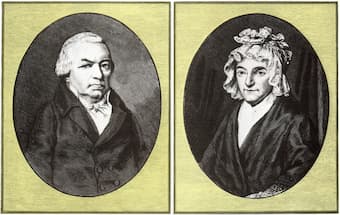 Ludwig van Beethoven probably wasn’t actually born on 17 December, but in the absence of an authentic record of birth, we rely on the registry of his baptism in the Catholic Parish of St. Remigius in Bonn on 17 December 1770. Since baptisms were usually carried out within 24 hours of birth, it is very likely that his actual birth date was 16 December. We have no documentary proof, but Beethoven himself considered 16 December to be his birth date. We do know, however, that Ludwig was born into a family that had been employed as musicians at the court of the Electorate of Cologne for three generations. His grandfather Louis van Beethoven was appointed Kapellmeister in 1761, and his son Johann van Beethoven was a tenor in the elector’s service. By all accounts, Johann was proficient enough on the piano and the violin to be able to supplement his income by giving lessons on those instruments. Johann married Maria Magdalena Keverich, already the widow of Johann Leym in November 1767. The newlyweds settled at 515 Bonngasse in Bonn, and their first child Ludwig Maria died in infancy. 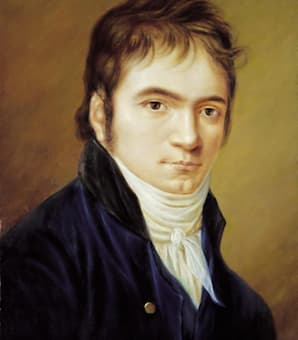 It is rather difficult to reconstruct the early years of Ludwig van Beethoven, who was after all, merely the son of an obscure musician in a small provincial town. There has been much speculation and myth making, but general accounts speak of his mother as “a gentle and kind woman.” His father, on the other hand, appears to have had a violent temperament and he became a heavy drinker. Ludwig’s musical talent was obvious at a young age, and he received first instruction on the piano and the violin from his father. It has been suggested that his father was an extremely strict and tyrannical music teacher, who “made corporal punishment a regular part of his son’s early musical education.” It is said that a young and often crying Ludwig was made to stand at the keyboard, even in the middle of the night. Young Ludwig first appeared in public on 26 March 1778, and being advertised as a “Wunderkind” performed “various clavier concertos and trios.” While he did receive music lessons from a number of local teachers, his general education did not extend beyond elementary school. 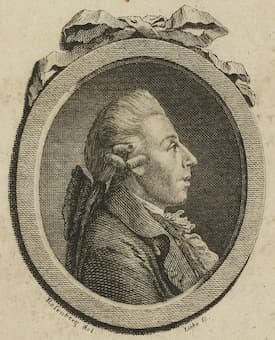 Christian Gottlob Neefe, who had arrived in Bonn in 1779, was Beethoven’s first important teacher. Appointed as court organist in 1781, Neefe gave piano and composition lessons to Beethoven, and helped him to secure the appointment as the court’s second organist in 1784. We find the first printed notice of Beethoven in a music magazine on 2 March 1783. “Louis van Beethoven, son of the tenor singer already mentioned, a boy of 11 years and of most promising talent. He plays the piano very skillfully and with power, reads at sight very well, and I need say no more than that the chief piece he plays is Das wohltemperirte Clavier of Sebastian Bach, which Herr Neefe put into his hands … So far as his other duties permitted, Herr Neefe has also given him instruction in thoroughbass. He is now training him in composition and for his encouragement has had nine variations for the piano, written by him on a march [by Ernst Christoph Dressler], engraved at Mannheim. This youthful genius is deserving of help to enable him to travel. He would surely become a second Wolfgang Amadeus Mozart if he were to continue as he has begun.” 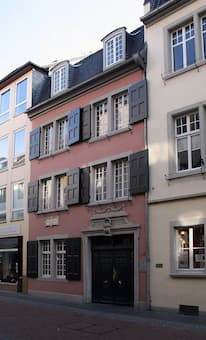 Beethoven’s house of birth in Bonn, 2008

As Beethoven was making a name as a virtuoso pianist in the Bonn region, Neefe suggested that the young genius should be given the opportunity to travel. As such, in the spring of 1787 Beethoven visited Vienna. Scholars are still “uncertain about the precise aims of the journey and the extent to which they were realized; but there seems little doubt that he met Mozart and perhaps had a few lessons from him.” His trip to Vienna was cut short by news that his mother was dying of tuberculosis, and Beethoven describes “the melancholy events of that summer and hints at his own ill-health, depression and lack of financial resources.” Until recently, Beethoven’s juvenilia compositions have not received an abundance of scholarly attention. However, they nevertheless serve as a point of departure for understanding Beethoven’s entire oeuvre. Johannes Brahms described some of these early pieces as “Beethoven through and through and prophetic of the style which would mark his music as distinct from the classical tradition.” Beethoven left Bonn for Vienna in 1792, and Count Waldstein wrote to him before his departure, “you are going to Vienna in fulfillment of your long-frustrated wishes… With the help of assiduous labor you shall receive Mozart’s spirit from Haydn’s hand.”