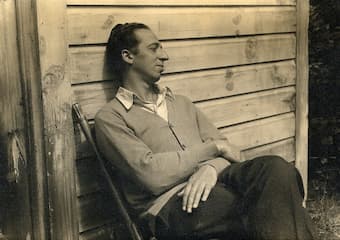 American composer Aaron Copland (1900-1990) only wrote one work for piano and orchestra, his 1926 Piano Concerto. To put this work in context, we need to listen to it not only as a work by the young American composer newly returned from study in Paris but also need to consider it against the work of his contemporary, George Gershwin. In 1924, Gershwin gave the premiere of his Rhapsody in Blue and in 1925 wrote the Piano Concerto in F. Both works were highly controversial in the classical music scene for their adoption and outright presentation of that popular culture genre of “jazz” in a classical setting.

Copland didn’t refer to Gershwin’s work, in fact, he rarely spoke of Gershwin at all, except in reference to this Piano Concerto. When asked to compare his music to ‘Mr. Gershwin’s jazz,’ Copland replied, ‘Gershwin is serious up to a point. My idea was to intensify it. Not what you get in the dance hall but to use it cubistically – to make it more exciting than ordinary jazz.’

When you listen to the work as being a kind of cubist jazz, we start to see what Copland was talking about.

The first movement sounds very much like early Copland orchestrally, but the piano entrance seems almost improvisational – there’s no melody to speak of and the orchestra seems to wait with bated breath to see what the pianist is going to do. In his program note for the premiere, Copland wrote “A short orchestral introduction announces the principal thematic material. The piano enters quietly and improvises around this for a short space….” Gradually the orchestra re-enters, but we aren’t getting the idea of the piano leading the way melodically as we would expect in a Piano Concerto. Some of it even sounds like lines from Porgy and Bess (still some 9 years in Gershwin’s future).


It’s really in the second movement that the jazz elements come to the fore. In a note for the concerto, Copland called this movement a ‘sonata form without a recapitulation,’ in other words, we get the exposition and the development but not the return to the original material. The final cadenza is described as ‘presenting difficulties of a rhythmic nature.’


The work was a commission from Serge Koussevitzky and the Boston Symphony, and at its premiere, Copland was the piano soloist. Originally presented as a one-movement work, the Piano Concerto is now generally dealt with as a two-movement work, which is understandable given the very different natures of the two movements. The end of the work is much like the exuberance at the end of Gershwin’s Piano Concerto in F.

Unfortunately, the audience at the premiere laughed at the work. The Boston Globe reported that ‘The audience forgot its manners, exchanging scathing verbal comments, and giggled nervously … creating so great a bustle that at times it was difficult to hear the music clearly.’ Another critic couldn’t figure out if he were listening to a jazz dance hall or the chicken yard next door. Now, at a greater distance from the 1920s, we can hear Copland’s innovations and wish that he’d done more with the genre. His version of cubist jazz could have been much deeper than Gershwin was able to give us.