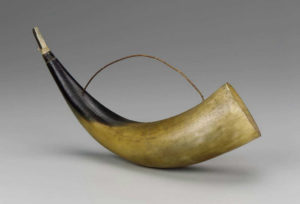 The horn has a long history, dating from the first time one of our ancestors took a cow horn and, holding it to his lips, found it could make a sound.

Moving on from the simple cow horn to the age of manufacturing, horns were next made of metal. This meant that the sound wasn’t dependent on the kind of horn you found and they could be used for a variety of tasks. The first use was for hunting and books from the 14th century detail the various calls a hunting hornist was expected to make. 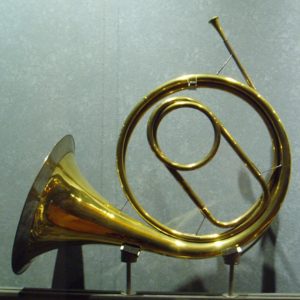 By the 17th century, the horn had come inside and was being used in France in Lully’s ballets, first for hunting scenes and then for other kinds of scenes. ), From France, the use of the horn indoors spread to other parts of Europe, and appeared in the Vienna Imperial Court Orchestra in 1712, whence it went to Italy.

In the early 19th century, musical instrument makers began to valves on the horns so that they could play a greater range of notes. A natural horn, i.e., a horn that is simply a length of metal with a bell, could play a range of notes in the overtone series: , C – C – G – C – E – G – Bb – C – D – E – F# – G- etc. Beginning with the horn’s lowest note, the next note is an octave above, then a fifth above, then a third above, and finally, at the top of the range, a stepped scale could be played but it was very difficult to keep in tune. 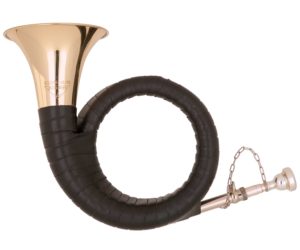 Stating in 1818, German instrument makers Heinrich Stölzel and Friedrich Blüme added valves and slowly their advantages came to be recognized. There is always a contingent for whom all change is bad and this new technology isn’t as good as the old ways of doing things.

Robert Schumann (1810-1856) was an enthusiastic writer for the horn, although we largely associate him with works for the piano. In his Rhenish Symphony of 1851, there are a number of outstanding horn passages that give the work a certain solemnity. 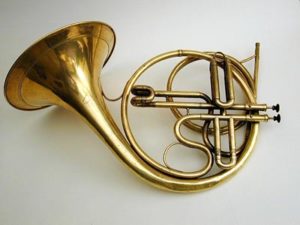 Before that, though, in 1849, Schumann took his love for the horn and multiplied it four-fold. His Concertstück for Four Horns and Orchestra, Op. 86, is a celebration of the horn in many ways, as itself, as an ensemble, and as an orchestral instrument. 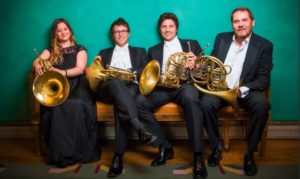 This work was the first to truly take the new valved horn seriously and create a virtuoso piece for the instrument. At first, its technical demands had players declaring the work unplayable. After its premiere in Leipzig in February 1850, the work languished in the repertoire until the players’ technical skill could catch up with Schumann’s writing.

The first movement, Lebhaft, starts with a truly heroic set of horn calls answered and extended by the orchestra.


The work’s three movements are played without pause, and the next movement is a beautifully crafted Romance, elegiac and languid, showing us the romantic and singing side of the horn.


The final movement seems to showcase the horns’ lightness and flexibility. Their lines intertwine and they emerge more as individual soloists. The orchestra seems to take over the horns’ earlier hunting sound. 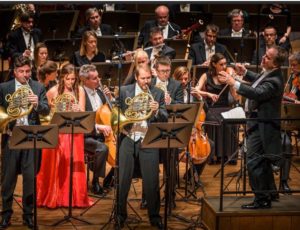 This recording of Schumann’s unusual work (in a letter to his publisher he called it ‘quite a curiosity’) shows us just how far modern horn technique has come. In the 19th century, a performance of this work wouldn’t have had the assurance of this performance – one reason valved horns were disliked was the frequent failure of the new technology – and we can now hear why Schumann called the horn the ‘soul of the orchestra.’