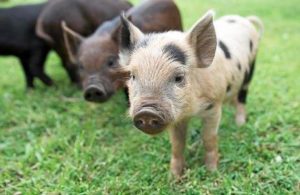 Science tells us, that we all got a lot of common with pigs. Since we are both mammals, we certainly share a good amount of genetic material, and we are both susceptible to catch the flu. Pigs are unusual in that they can be infected with influenza strains that usually infect three different species; pigs, birds and humans. As such, the pig becomes a host where influenza viruses might exchange genes and therefore produce new and unique influenza variants. Pigs most commonly tend to catch a type A influenza, a respiratory disease that can circulate among swine throughout the year, with most outbreaks occurring similar to outbreaks of seasonal influenza in humans. There are a good many different subtypes and strains of swine influenza viruses, and outbreaks happen with some regularity. Levels of illness in herds can be devastating, but it is rarely fatal to the animals. Swine flu viruses do not normally infect humans, with the exception of the H1N1 virus, which is endemic to humans, pigs and birds. Fortunately, the virulence of the swine flu virus is mild and mortality rates tend to be very low. However, the 2009 flu pandemic affected 700-1,400 million people and caused about 150,000-575,000 deaths. It’s no laughing matter for sure, but in poetry and music, pigs tend to be treated with a good deal of humor. 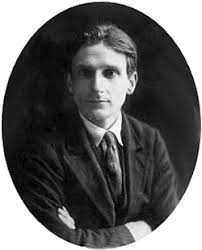 Edmund Blunden (1896-1974) served in France and Belgium during World War I, and he wrote of his war experiences in both verse and prose. Nominated for the Nobel Prize in Literature six times, Blunden spent much of his career as an academic in Tokyo and later Hong Kong, ending his career as Professor of Poetry at the University of Oxford. He spent a great deal of time in editing and writing biography and criticism, and he edited volumes of contemporary poetry and published studies of writers of the late 17th and mid-18th centuries. Known for his robust sense of humor, Blunden wrote poems about the English countryside. The Poor Man’s Pig, musically encoded by Geoffrey Kimpton, describes a peaceful country scene of apple and plum blossom interrupted by an encounter with a lively and hungry pig “dashing around the yard with grunts galore.”

Already fallen plum-bloom stars the green
And apple-boughs as knarred as old toads’ backs
Wear their small roses ere a rose is seen;
The building thrush watches old Job who stacks
The bright-peeled osiers on the sunny fence,
The pent sow grunts to hear him stumping by,
And tries to push the bolt and scamper thence,
But her ringed snout still keeps her to the sty.
Then out he lets her run; away she snorts
In bundling gallop for the cottage door,
With hungry hubbub begging crusts and orts,
Then like a whirlwind bumping round once more;
Nuzzling the dog, making the pullets run,
And sulky as a child when her play’s done. 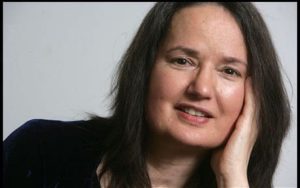 Jo Shapcott (b.1953) is an acclaimed English poet who has won the National Poetry Competition, the Commonwealth Poetry Prize, the Costa Book of the Year Award, a Forward Poetry Prize, and the Cholmondeley Award. Shapcott has been described as a pioneer among contemporary British writers, “overwhelmingly a poet of presence, renegotiating the concrete world… Her consummate openness…extends the possibilities for poetry written in English.” Her lyrics and poems have been set to music, and that includes a 2002 setting by Liz Johnson. The speaker of Pig “reflects on the scope and variety of female appetite.”

You think of me
as clean and tasty,
don’t want to know
about the mud, the tail,
the terrible trotters

don’t want to know
about the neat little hats
in my wardrobe, the orchid
collection and the lengths and lengths
of breaststroke, the days and nights
in the Railtrack buffet
and the mad rapture for molluscs. 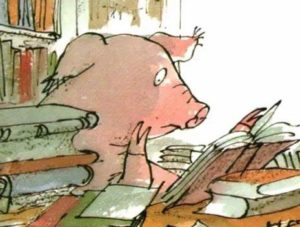 Roald Dahl (1916-1990) was one of the “greatest storytellers for children.” Unsentimental, macabre and often darkly comic, his books are famous for their unexpected endings. Plenty of readers find his writings deeply disturbing, and he has been lambasted for any and all kind of “isms” imaginable. However, “to write brilliantly for children,” a critic wrote, “an author must retain an element of the childlike…If Dahl’s books contain just one message for us adults, it’s the reminder that a child’s world isn’t all sweetness and light, it contains shadows too—extravagant, scary, wickedly entertaining ones.” And you don’t have to look very far to find the macabre and unexpected in his poem “The Pig,” musically encoded by Martin Butler in his cycle Dirty Beasts.