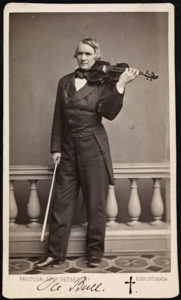 If we can trust Robert Schumann’s assessment, the Norwegian violin virtuoso Ole Bull (1810-1880) was an “equal to Paganini for the speed and the clarity of his playing.” However, Bull’s path to fame and fortune was not an easy one. Despite showing some early musical promise, his father wanted him to become a minister. He was sent to the University of Christiania but deliberately failed all of his examination. Bull even spent a bit of time in Germany pretending to study law, but in the end he decided to make his way to Paris. Bull shared lodgings with the brilliant young violinist H.W. Ernst, who introduced him to Paganini’s style of playing. However, he was unable to find any kind of employment and suffered through a prolonged illness. It is said that he survived due to the kindness of his landlady, a certain Mme Villeminot, whose granddaughter Félicie he married in 1836. 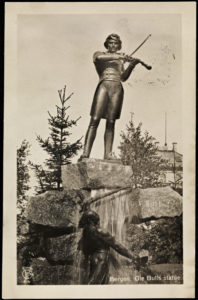 According to popular lore, things were looking rather bleak as his clothes and his violin had been stolen. Gripped by despair, Bull contemplated suicide by jumping into the Seine. However, a chance acquaintance suggested that he might improve his fortunes by visiting a gambling establishment. Playing “rouge-et-noir,” he was counseled to place his last francs on red. He won, and continuing to play red, he won again and again until he had a large sum of money before him. Taking the money, Bull retired from the table but continued to watch long enough to observe that he would have won a fortune had he continued his play. He subsequently wrote to a friend, “What a hideous joy I felt, what a horrible pleasure it was to have saved one’s own soul by the spoil of others.” According to legend, he soon purchased another violin and gave a concert accompanied by a string quartet, double bass and flute. He attracted good reviews, but still had to depart from Paris in June 1833 without having attracted significant attention. Bull made his artistic breakthrough in Bologna in 1834, and eventually counted Franz Liszt among his close friends. Generally speaking, gambling will not solve your problems, but it certainly worked out for Ole Bull.