In Tune Society
Concerts in the Time of Coronavirus
by Frances Wilson April 8th, 2020 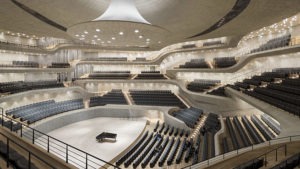 Concert
– a performance by musicians or singers for an audience

The word “concert” conjures up an image of a beautiful hall, an orchestra or soloists on stage and an appreciative audience listening intently. From the grand old halls such as the Musikverein in Vienna and the scientifically-designed modern venue such as the Elbphilharmonie in Hamburg or the NOSPR hall in Katwoice, Poland, to small intimate venues, these are the places where musicians and audiences gather to share in the unique experience of live music. Hearing music performed live has its own special excitement and it can leave the listener feeling refreshed and energized, consoled and joyful, as music has the power to express the full range of human emotions. But live concerts do more than this: they can create time to listen, to really listen, and to shut out the noise and chatter of daily life for a few hours at least.

The coronavirus pandemic has very suddenly and brutally caused a shift in how we access and enjoy music and has, in a way, redefined the word “concert”. Within hours of London’s concert halls, opera houses and other music venues closing their doors as people were asked to engage in social distancing to prevent the spread of the virus, musicians were out of work. For most musicians, performing in concerts, in venues large and small, is not only their raison d’être but, more significantly, their income because without concerts, there are no fees for performers.

However, in a bid to continue playing, musicians have flocked online offering performances from their living rooms or studios, the places where they are self-isolating, and now the internet is alive with the sound of music. Technology is playing an imaginative part too, with musicians using platforms like Zoom in order to perform with others yet remain in self-isolation. This has created some wonderful performances, including the Carducci String Quartet in an uplifting 3rd movement of Philip Glass’ String Quartet No. 2 with all the musicians playing their parts by video from their homes.

In addition, organisations such as the Metropolitan Opera in New York or the London Symphony Orchestra, quickly started offering livestreams and webcasts of performances, which people can enjoy from the comfort of their own homes, and thus lending a different meaning to the words “concert” and “house concert”.

The quantity and, more importantly, quality of the music is quite extraordinary, and while these online performances and livestreams can never replace the experience of hearing the music live in a concert hall, they do keep us in touch with the musicians and the artform we love.

UK radio station Classic FM reports that a recent “living room” concert by their Artist-in-Residence violinist Maxim Vengerov has been viewed by more than 50,000 people, with 1,500 peak live viewers – more than the number that can fit comfortably into a medium-sized concert hall. If these online viewers translate into paying concert-goers when the venues eventually reopen, this could signal a marvellous resurgence for classical music and perhaps even encourage new audiences, a perennial issue for the artform. Such performances also bring the musicians closer to their audiences and break down the traditional barriers normally associated with classical music and the rituals of its performance and presentation. So maybe the coronavirus could have a positive impact on the way music is presented and enjoyed; of course much of this remains to be seen when the concert halls and opera houses reopen. We can but hope…