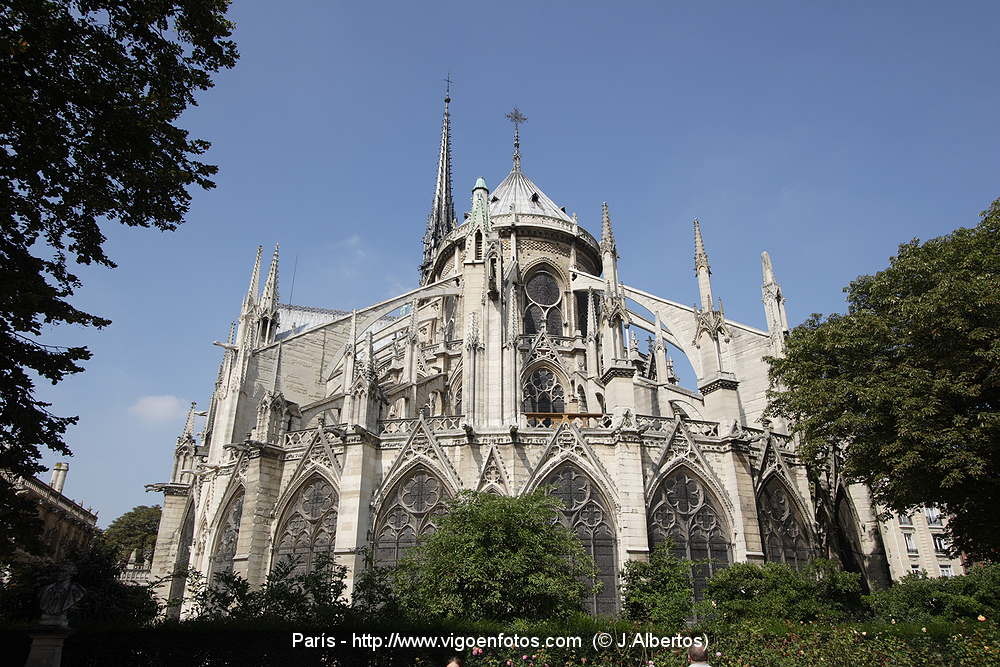 Notre-Dame de Paris is the most famous Gothic Cathedral of the Middle Ages. Construction began in 1163 and had to overcome a number of architectural concerns. The popular Gothic building style called for higher and thinner walls. As the walls reached greater heights, stress fractures began to appear and the walls started to push outward. Looking for a solution, cathedral architects began to brace the walls by arched exterior supports, also known as flying buttresses. The two key components of the flying buttress system are a massive vertical masonry block on the outside of the building, and a segmental arch bridging the gap between the buttress and the wall. “To build the flying buttress, it was first necessary to construct temporary wooden frames which are called centering. The centering would support the weight of the stones and help maintain the shape of the arch until the mortar was dry.” With the flying buttresses constructed, the walls could now resist the lateral forces, and the High Altar of Notre Dame was consecrated in 1182. This of course, allowed for initial church services to be conducted. 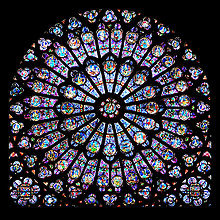 A number of architects oversaw the construction process over the next decades, resulting in differing styles at different heights of the west front and the towers. One of the most significant stylistic changes in design occurred around the mid 13th century. Moving away from the spatial rationalism practices by the High Gothic style, architects now emphasized the repetition of decorative motifs at different scales. This new design direction was subsequently termed “Rayonnant Style” in the 19th Century, but the practical application resulted in the spectacular stained-glass rose windows. Once the Cathedral was completed, John of Jandun wrote in his 1323 Treatise on the Praises of Paris. “That most terrible church of the most glorious Virgin Mary deservedly shines out, like the sun among stars. Where could you find two towers of such magnificence and perfection, so high, so large, so strong, clothed round about with such a multiple variety of ornaments? Where could you find such a multipartite arrangement of so many lateral vaults, above and below? Where, I ask, could you find such light-filled amenities as the many surrounding chapels? In fact I believe that this church offers the carefully discerning such cause for admiration that its inspection can scarcely sate the soul.” 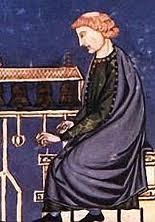 This extraordinary and magnificent architectural space also spawned the beginnings of modern Western music. An English student studying at the University of Paris in the second half of the 13th Century wrote a most important theoretical treatise on the musical life in the city. This treatise, called Anonymous IV, mentions the composers Léonin and his successor Pérotin, both active at the Cathedral of Notre Dame. Both composers significantly contributed to the development of polyphony by defining a musical style called “Organum.” Generally, “Organum” involves two musical voices. A melody taken from Gregorian chant is enhanced by an additional voice singing harmony. Originally, the harmony voice moved in parallel intervals, but in the hands of Léonin became more independent, creating true polyphony. Léonin composed a Magnus Liber, a “great book” of organa, and invented a system of notation and rhythmic organization that made it possible to write down the music. “It was Léonin’s incomparable achievement to introduce a rational system of rhythm into polyphonic music for the first time, and, equally important, to create a method of notation expressive of this rhythm.” Pérotin expanded on the achievements of his predecessor and pioneered the styles of “organum triplum” and “organum quadruplum” (three and four-part polyphony.) In due course, the amazing musical innovations of Léonin and Pérotin helped to establish the “Notre Dame School of Polyphony.” John of Salisbury (1120–1180) taught at the University of Paris during the years of Léonin and Pérotin, and he attended many services at Notre Dame. He wrote, “When you hear the soft harmonies of the various singers, some taking high and others low parts, some singing in advance, some following in the rear, others with pauses and interludes, you would think yourself listening to a concert of sirens rather than men, and wonder at the powers of voices … whatever is most tuneful among birds, could not equal. Such is the facility of running up and down the scale; so wonderful the shortening or multiplying of notes, the repetition of the phrases, or their emphatic utterance: the treble and shrill notes are so mingled with tenor and bass, that the ears lost their power of judging. When this goes to excess it is more fitted to excite lust than devotion; but if it is kept in the limits of moderation, it drives away care from the soul and the solicitudes of life, confers joy and peace and exultation in God, and transports the soul to the society of angels.”