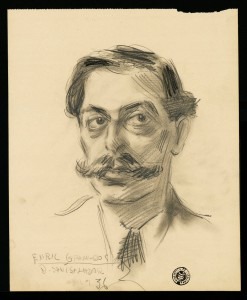 Francisco Goya (1746 – 1828) lead a life in and out of favour with the Spanish king and his highly dramatic paintings and etchings, particularly in relation to the various Spanish wars, were highly influential. His pictures of woman, his ‘maja’ pictures, were an inspiration to Spanish composer Enrique Granados (1867-1916) and in their honor, he wrote his set of piano pieces called Goyescas (In the Manner of Goya).

What drew Granados to Goya’s works was the contrast in colours. In a 1910 letter he explained ‘…I fell in love with the psychology of Goya and his palette… that rosy-whiteness of the cheeks contrasted with lace and jet-black velvet, those jasmine-white hands, the colour of mother-of-pearl have dazzled me…’

Granados was one of the most important Spanish composers of the Romantic era, and in Goyescas, he created one of the great works of Romantic piano music. Its harmonies have been described as ‘jewel-toned’ and one critic said that the music gave performer and audiences alike the ‘… voluptuous sense of passing the fingers through masses of richly-coloured jewels’. 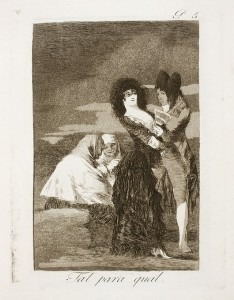 Goyescas was written as two collections plus one additional piece but now form a united seven of 6 pieces. Not all of Goyescas can be directly linked with works by Goya by title, but some parallels can be made.

No. 1. Los requiebros (‘Flattery’), was inspired by Goya’s Capricho, Tal para cual, and is based on the dance form called the ‘ajota.’ The work is a set of variations based on an 18th-century piece by Bas de Lasema, Tirana del Tripoli.

No. 2. Coloquio en la reja – Dúo de amor (‘Dialogue at the window’ – love duet) captures the mood inherent in the picture of the hidden woman in the house speaking with her suitor through the grill that separates them. The picture, however, is not by Goya, but by Granados himself, in a very Goya-esque style.

No. 2. Coloquio en la reja, duo de amor (Alicia de Larrocha, piano)
No. 3 El fandango de candil (‘Candlelit fandango’) is clearly a night piece. It is full of rhythm and shadow, and was described by the composer as a ‘scene to be sung and danced slowly and rhythmically.’

No. 3. El fandango de candil (Alicia de Larrocha, piano)
No. 4. Quejas, o la maja y el ruiseñor (‘Laments or the Maja and the nightingale’) is based on a folk-song from Valencia, and Granados takes the melody through a set of variations, each one more decorated than the previous, until he concludes in a cadenza imitating the nightingale. 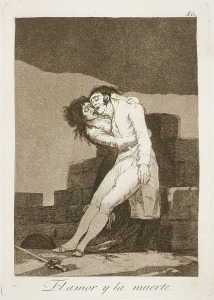 No. 5. El amor y la muerte (Love and Death) (Alicia de Larrocha, piano)
No. 6. Epílogo: Serenata del espectro (‘Epilogue’ – The ghost’s serenade) uses the Dies Irae, the Roman Catholic chant for the dead. At the conclusion the score indicates that the ‘ghost disappears plucking the strings of his guitar.’ There are no Goya paintings of ghosts and guitars, but ghostly imagery was evident in many of Goya’s end-of-life ‘black’ paintings he did for his house called Quinta del Sordo (House of the Deaf Man), where, in recovering from a serious illness, he lost his hearing. 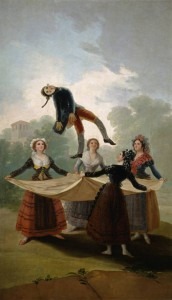 No. 6. Epilogo: Serenata del espectro (Epilogue: The Ghost’s Serenade) (Alicia de Larrocha, piano)
No. 7. El pelele – Escena goyesca (‘The straw man’– scene from Goya), comes from Goya’s painting of the same name. The paining depicts a group of women, his majas, holding the corners of a blanket and tossing a straw man in the air.

El pelele, goyesca (Alicia de Larrocha, piano)
Six of the seven parts of Goyescas (No. 6 was excluded) were used as the inspiration for his opera Goyescas, which received its debut at the Metropolitan Opera on 28 January 1916. On his way back to Spain, his ferry boat from England to Dieppe was torpedoed by a German U-boat and Granados drowned trying to save his wife. The manuscript of the opera went down with the boat.