In 1947, with Lucifer, American painter Jackson Pollock (1912-1956) put down his brush, laid his canvas on the floor, and started to apply his paint by drips and spatters. In this canvas, he also added small bits of gravel to change the texture.

This is his first trials of his new technique – over the next four years he would return to the style and apply to it a logic and control that cut it away from any precedents for the mode. If loading his brush with new paint disturbed his artistic flow, drip and spatter gave him the opportunity for a continuous line. His paint was now thinner, and its runny quality gave him a flow that he equated with artistic energy. 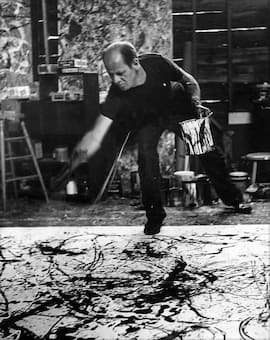 This action painting resists a narrative, and, in fact, becomes an ‘anti-narrative’ painting. Parallels can be made to the general restlessness of the post-war period and the corresponding movement towards increasing industrialization. In Pollock’s work, a parallel can be made through the title – Lucifer is both the morning star and the fallen angel of the same name – with Pollock’s innovative creativity and his fall into alcoholism at the same time.

The creation process involved the use of industrial black enamel and aluminium paints, poured from the can, colour bursts of yellow, red, orange, blue, and purple from paint tubes, and then, removing the canvas from the floor and angling it up, pouring green paint that dripped horizontally. 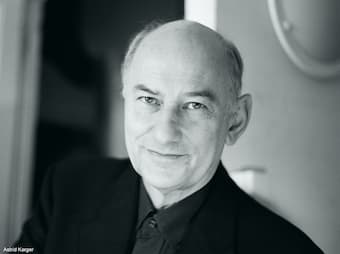 French composer Hugues Dufourt (b. 1943) saw a psychodrama in the work. There’s more than a hint of violence, there’s chaos, the colours become indefinable, the lines are entangled. Just like Pollock’s anti-narrative, Dufourt’s work Lucifer d’après Pollock (2000) also resists a narrative reading. There’s no evolution in the work, it doesn’t come to a climax while at the same time the intrinsic violence destroys any sense of respite or relief.


Pollock’s action paintings created controversies in the art world and in following his path, Dufourt causes his own controversies in the musical world. He uses the orchestra as an instrument of sound and timbre but also as a way of resisting the simplistic stories about music that are created so often. Just as Pollock created an anti-narrative, so Dufourt follows him.