Slimmed down to just a shadow of a profile, the Golden Bird launches itself upward. Its feet and tail are streamlined down to just minimal forms and the bird is topped with an upturned beak, crowing at its freedom. 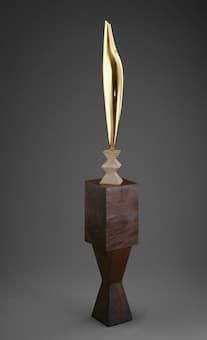 Constantin Brâncuși started his Bird series in 1910 and, in the 1940s, sculpted his 27th and final bird in the series. When he began the bird was called Maisatra, from a Romanian folk story about a bird that brings a prince to his princess. In other stories, Maisatra was the Queen of the Birds, and could restore your youth if you heard her song. All that mythology is left out when Brancusi changed the name to simply Bird. These birds of pure line were an inspiration to artists seeking to simplify, simplify, simplify. Bird in Space, one of the Bird series sculptures has been credited with helping “to define modern art.”

Early versions of the bird from around 1912 sought to keep the body definition, giving the bird a bulging belly, a more defined eye, and beak. By 1919-1920, the bird had become far simpler, seeming just a curve of light. The name of the works in the series changes around then to Bird in Space. He made them in different colours of marble (yellow, grey, white, blue-grey and ‘coloured’) and bronze (cast, gilded, polished). 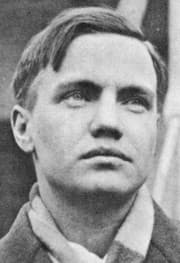 American composer George Antheil (1900-1959), known widely as The Bad Boy of Music for his antics after his return from France in the 1920s, made his London debut in 1922 at Wigmore Hall with an eclectic program of Chopin, Stravinsky, Albéniz, and Debussy… and five pieces of his own. One of those pieces, The Golden Bird, is an homage both to Constantin Brâncuși’s abstract sculpture, and to Stravinsky’s Firebird.

In this 1921 work, we start immediately with a rush of wings as our golden bird takes to the skies. Antheil contrasts the different ranges of the piano – a thudding low voice versus high pitched tone clusters – giving us a vertical view of the bird in motion, just as Brâncuși did.


Antheil’s orchestral version was written in 1921 at the same time as the piano version. But the two pieces are quite different. Each version feels like it was the original and one commentator made a note that this was not unlike Ravel’s orchestrations of his piano music, which also sounds as though either version could be the original. The orchestral colour seems at times to be oriental, at other times to have a distinctly European feel and yet, above all, seems beyond both those soundscapes. The twitter and flight of the bird has its place as well. We can well hear why an early title for this work was Chinese Magician and another was The Golden Bird: Chinoiserie, but the final title of Golden Bird, after Brancusi seems to pull all those ideas together.


The wooden base of the Golden Bird at the Art Institute of Chicago, as above, was also created by Brâncuși. The rough outline of the geometric wooden base stands in stark contrast to the golden flow of the bird, but it’s important to note that Brancusi created the large central form out of the middle of the tree trunk, so that the tree-rings create a central circle – a base with its own sense of motion. The bases were deliberately made of a softer material (wood and stone) to offer a cushioning effect and to hold the piece at the height he wanted. He rejected the standard museum bases, which were of a standard form and size, saying “Just as long as they don’t put my sculptures on those terrible pedestals they make…changing the height and everything else.”

Moving a piece of abstract sculpture from sight to an audio work for the ears and brain is difficult. In the piano and orchestral pieces, Antheil gave us two views of a unique work.