Composers Inspiration
Claudio Monteverdi: (1567-1643)
“The modern composer builds upon the foundation of truth”
by Georg Predota May 20th, 2017
Tags: Monteverdi 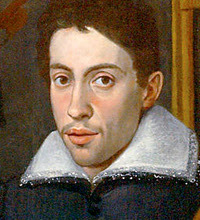 When Claudio Monteverdi secured his first job at the ducal court in Mantua, he had to report to the maestro di cappella Giaches de Wert. A Franco-Flemish composer actively working in Italy, Wert was one of the leaders developing the style of the late Renaissance madrigal. Wert took the young Monteverdi under his wings, and Ecco mormorar l’onde, the most celebrated madrigal in Monteverdi’s second book of madrigals, is closely modeled on the musical style of his mentor. Monteverdi exploits a wide range of madrigalisms in his musical description of a lakeside dawn, and an inescapable musical logic steadily intensifies towards the final cadence.

Monteverdi’s responsibilities at the Gonzaga court also included performing and arranging music for the stage. And since Vincenzo Gonzaga had a particular passion for musical theatre and spectacle, the young composer was invariably exposed to the “intermedio” a form of musical interlude inserted between the acts of spoken dramas. And the first recognizable opera Dafne, composed by Corsi and Jacopo Peri combined elements of madrigal singing and monody with dancing and instrumental passages. Monteverdi’s first opera L’Orfeo of 1607 is based on a libretto by Alessandro Striggio, and according to Nikolaus Harnoncourt, “blended existing musical styles into a unity that was entirely new.” It also uses a large instrumental ensemble symbolizing the various spheres in which the drama is played out. Recorders are used for pastoral scenes, and trombones depict the underworld.

In all, Monteverdi composed at least eighteen operas, but only L’Orfeo, Il ritorno d’Ulisse in patria, L’incoronazione di Poppea, and the famous “Lamento d’Adrianna,” from his second opera L’Arianna have survived. First performed as part of the musical festivities for a royal wedding at the court of Duke Vincenzo Gonzaga in Mantua, the music of the “Lamento” survives because it was published independently from the opera. Relating the classical text of Ariadne’s abandonment by Theseus on the island of Naxos, the lament is an extended recitative delivered in five sections divided by choral comments. It defines Monteverdi’s “innovative creativity and his discovery of a new expressive frontier.” In fact, the expressive lament became an integral feature of Italian opera for much of the 17th century.

Mourning the loss of his wife and courting employment in Rome, Monteverdi wrote a monumental setting of the service of Vespers for the Blessed Virgin Mary in 1610. Advertising his varied abilities as a composer, Monteverdi presents all commonly heard musical styles in Italy at the beginning of the 17th century. It includes psalms, hymns and chanted lessons, alongside a suite of instrumental dances, concerto sections for voices and orchestra, and even a love song. The 1610 Vespers is a remarkable collection of music in a grand musical design, full of sensuous intimacy and drama that is theatrically maintained. Hard to believe, but Monteverdi did not get the job!

Monteverdi’s time in Venice provided the fitting climax to his career, and his last opera L’incoronazione di Poppea composed for the 1642/3 season, is often considered his supreme masterpiece. For one, it is the first opera based on actual historical events. The story of Nero and Poppea was well known, and Monteverdi musically describes each character’s psychology in music. Arias and instrumental pieces alternate with flowing recitative, and the composer uses instrumental ritornelli and musical motives to bind smaller sections into larger cohesive units. Monteverdi’s talent for communicating the whole range of human emotions propelled music into a completely new and almost modern consciousness. 450 years after his death, his music has lost none of its power and expressive force!