When I was researching this article I thought of titling it, Is Music Supernatural? But I’ve always known inside me that music is mystical; my research just confirmed it.

One of the problems in talking about music as being supernatural or reflecting mysticism is the language that surrounds these things. So I won’t give a description of the supernatural or mysticism. That said, no one else has managed to describe what music is with universal agreement, probably because it is indescribable.

Just to be clear, I’m not talking about the religious or spirituality in music, but about that unknowable essence that music owns. Perhaps one way of describing music and its unexplainable quality is to say that music is a sound mirror of the self, of human beings; but it is also a system.

The ambiguity of music leads me to describe music as supernatural. But, music can also have a profound effect on us while its reasoning remains unknown and unclear. Our subjective taste for certain styles of music might lead us to feel that some music is supernatural. Such as, why does Gregorian Chant sound so unearthly? Or so much of the music of Arvo Pärt?

I am constantly pulled towards Ambient Music, the electronic variety mostly because of the way it relaxes me and sets my cares at ease. Composers like Brian Eno and Harold Budd have created the go-to sounds to help me get away from the distractions of the world. In particular their 1984 album The Pearl. This album may be the best music to explain how music is supernatural. 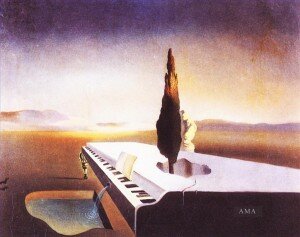 “Necrophiliac Fountain Flowing from a Grand Piano” by Salvador Dali

There have been many things written about the parallels between the western calendar and western tonal music. However, the calendar is a human construct, music is not. Music exists by itself in objects. Strike a log or a piece of metal and you will hear their music. Listen to the wind as it cuts across a taut wire, or the sound of waves crashing on a beach; there’s music in these things.

It’s fair to say that music has been manipulated by humans to create a certain sound, such as Equal Temperament tuning. This raises that old philosophical question, is the supernatural in music or in us? Is it our reading of and perception of music that makes us think there is something other-worldly about it?

Are we the ones, us listeners and writers who put the mystical in music or does it exist naturally? Stravinsky hints at supernatural music when he said, “If music appears to express something, this is only an illusion, and not a reality”.

British composer and music scholar Robert Sherlaw-Johnson said of Messiaen’s music that “although it exists in time, it has the power to bring the listener in contact with eternity”. He may have hit the nail on the head with his words. To me, this statement declares that music is supernatural.

When I, and I imagine you listen to certain pieces of music, you get a feeling of, how is this sound possible? Why does it mean so much to me? Even with asking these questions, you still love it and it is as close to you as your best friend, while it can’t be explained why.

Certain instruments are better at exposing the mysticism of music, like meditation gongs, the piano, the harp and especially today’s wide array of electronic instruments. The endless variety of sounds that can be created and manipulated in a Digital Audio Workstation (DAW) remain endless. There will never be a conclusion to the new ambient sounds that can be made from just one DAW on the market, let alone the many dozens out there.

Virtual Studio Technology (VST) is a plugin that interfaces with a DAW. There are millions of these available and what they do is let people create sounds in their DAW. Then there are synthesisers that make and manipulate sounds. These are used in most ambient music. What they do is help expose the supernaturalness of music.

A lot of ambient music is written the same way as classical music is. Ambient music will have a key centre, a time signature and use various pitches and rhythms. But, the way these electronic technologies twist and tweak music gives it that unearthly and unparalleled sound.

Music is ambiguous. Even with a label or description, most music can mean anything. And almost nothing else on this earth has the quality of music.