In Tune Arts
Music in View: The Victoria and Albert Museum
by Maureen Buja October 26th, 2021

The collection at the Victoria and Albert Museum in London is idiosyncratic, to say the least. Within the British national collections, that V&A holds sculpture and applied arts. The first musical piece of applied art is an 18th century work of vengeance.

The mechanical organ known as Tippoo’s Tiger was found in the palace of Tipu Sultan, the rule of Mysore in South India. It is a nearly full-size figure of a European man dressed in a red jacket, knee trousers, white stockings, and black shoes, with a gold-rimmed black hat liking prostrate under an attacking tiger. The figure’s left hand moves to cover his mouth and a barking sound imitates his wails. On the tiger’s shoulder is a crank that operates the movement of the hand, the barking sound, and the bellows for a little chromatic organ inside the body of the tiger. The tiger was found in the music room of the palace of Tipu Sultan after he was killed, and his palace was overrun by the British Army. The organ made its way to London in 1800 before being moved to the predecessor of the V&A Museum, the South Kensington Museum. The tiger was first noticed in 1792 but it is not known who created it nor the exact date it was made.

Tipu Sultan was known as the Tiger of Mysore and many of the objects in his armory were stamped with the image of a tiger. His cannons, for example, had tigers modelled into the barrels so as to show the tiger spitting out the cannon ball when the cannon was fired. To show a tiger ravishing a European, probably representing the British East India Company, of which he was an implacable enemy, shows the personification of Tipu Sultan’s ideals for all invaders of his country. 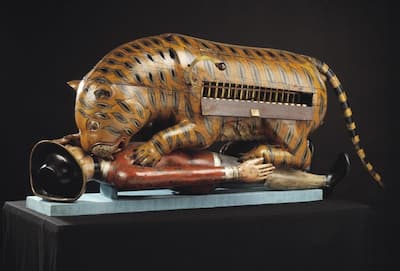 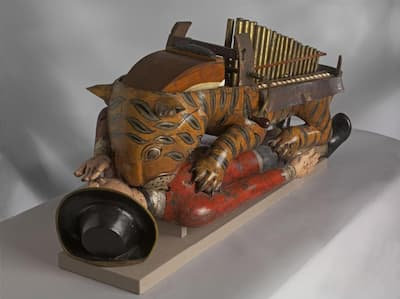 In this large (389 cm x 140 cm / 12.76 feet x 4.5 feet) tile panel, musician and dancers perform on an outdoor terrace by a water feature. On the left side, a table holds a music score lying on top of a wood-wind instrument – perhaps a recorder or perhaps a shawm. Leaning against the table is a viola da gamba. Towards the center, a man plays on a violin, holding it against his chest. On the right side, a man plays a woodwind instrument – it could be a recorder or perhaps a wooden cornet. At the far right side, a small viola da braccio and its bow lie on the ground. The 120 tiles of this panel show us an ideal time on a country estate. The panel was created for a music room of a country house outside Lisbon. These kinds of tile panels were popular in the early 18th century after Portugal placed an embargo in importing Dutch tiles, to the benefit of the Portuguese tile makers. Monumental tile panels were used for buildings in Portugal such as convents, churches, and palaces, for walls, ceilings, corridors, and staircases through the 17th and 18th centuries.


This striking painting of a young woman playing a vina is an illustration of a sound. It shows the musical mode ‘Gujari Ragini’. It is a musical mode of the monsoon season, representing the sorrow of separation. Images like this are found in ragamala (meaning ‘garland of ragas’) painting collections to evoke the music effect of the raga through a visual metaphor. The parrot stands in for the woman’s absent lover (in other paintings of this genre, a peacock may take the lover’s place). This is an image that does not exist in Western art – we don’t show images of musical feelings to evoke the feeling in place of the music, although we have seen representations of sound in an otherwise silent artwork. 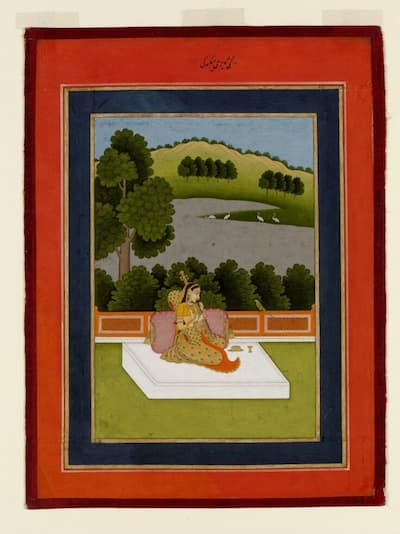 Assembled in a tavern, singers and musicians have a musical get-together. Six singers join a flautist, violinist, bassoonist, and a gamba player, propping their books on the table and gathering in a circle to make music. The 18th century saw the rise in England of glee clubs, where men would get together to sing both traditional songs and popular songs of the day. Tavern keepers would often set aside a room for the musicians to gather. The artists, John Masey Wright, was known as an excellent amateur musician before turning to art. 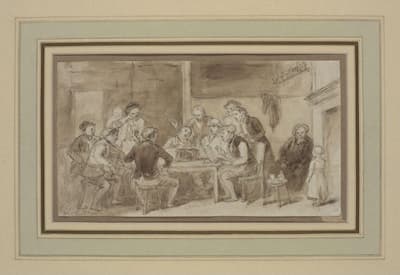 
Sir Walter Scott’s 1829 novel Anne of Geierstein, or The Maiden in the Mist was part of Scott’s Waverly novels and covers the Burgundian defeat in 1477 at the Battle of Nancy. In Chapters 29-30, the character of King René and his love for the arts became the inspiration for a cabinet created in 1860. A collaboration between Dante Gabriel Rossetti, Edward Burne-Jones, Ford Madox Brown and Val Prinsep, the cabinet should properly be called ‘King René’s Honeymoon Cabinet’ rather than ‘King René’s Honeymoon’ as it is more commonly known. The group decided to construct a purely imaginative object: ‘the cabinet that King René of Anjou might have had commissioned for himself and his second wife Jeanne for their honeymoon.’ The panel for ‘Music’ was designed by Dante Gabriel Rosetti and shows the uncrowned King René kissing his first wife, Queen Isabella, as she sits at her organ. The organ bears the names of René’s kingdoms: Jerusalem, Sicily, Naples, and Cyprus. The image was made into a stained-glass piece and was shown at the 1862 International Exhibition. 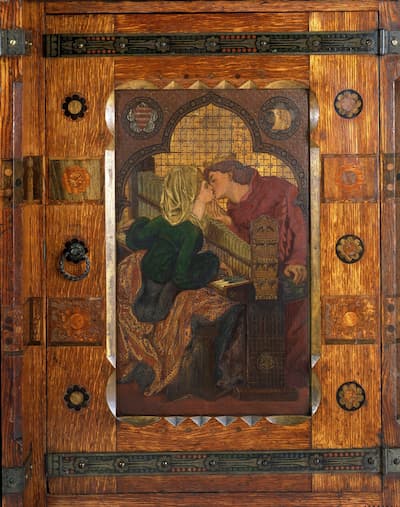 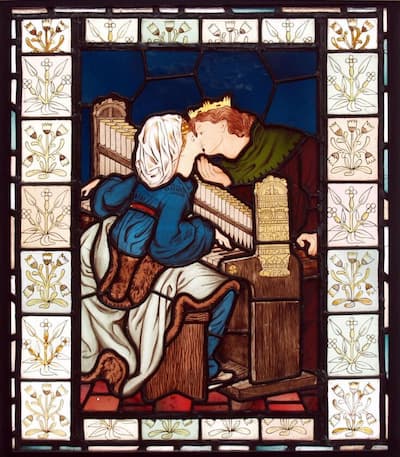 
The strictures of living in a Catholic country come to the fore here as the suspicious old nun, Donna Chiara, finds Rosa’s infatuation with the music of the minstrel dangerously close to Rosa being in love with the minstrel. In the early 19th century, paintings of the Italian and Swiss countryside became popular, depicting the classical architecture and the beautiful blue skies of the south. The artists, Thomas Unwins, RA, did a tour of Europe and made his name with Italian genre subjects. When this work was shown in 1848, it had this quotation from an old Italian story with it: ‘Poor Rosa! To relieve the solitude of the villa she would have her chair taken out on the terrace where she would sit for hours listening to the music of a wandering minstrel: even this pleasure was at last denied her. Donna Chiara the old nun in the household took it into her wise head that the minstrel was a lover in disguise.’ 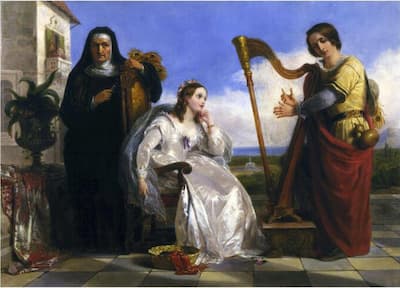 
In this woodblock print from around 1804, the courtesan Takeo, centre, is showing off her new bedclothes. Her guest in the centre panel is Sawamura Gennosuke I, a popular actor of the day. On the right, a young courtesan and her maid wrap New Year’s money in paper while in front of them, another actor, Iwai Kiyotao, drinks sake. On the left, two geisha play musical instruments while another maid brings in food in the form of boxes of noodles. The woman on the right plays the shamisen, a long-necked instrument with 3 strings played with a large pick called a ‘bachi.’ It was one of the instruments of the geisha and also was associated with the music for kabuki theatre. The other geisha has two drums with outside cording. You strike the drumhead with one hand and can change the pitch of the drum by tightening the side cords.


The artist Arthur Devis made his name in these portraits of the 18th-century upper–middle class at their country estates and their leisure activities. The room has been empties of all regular furniture and only holds a harpsichord and paintings on the wall. Large arch windows show the extensive grounds outside the house. Everything in the picture, including the harpsichord, speaks to wealth, taste, leisure and the harpsichord adds the ideas of culture and harmony. To emphasize this idea of leisure, the man is choosing the music for the woman, who reaches up to take it. A violin and bow lie on the harpsichord, indicating that the man is more than a spectator – he will take his part in the duet. Unfortunately, the couple is anonymous and the setting they were placed in is probably more generic than real. Nonetheless, they found it important to engage an artist to show the world how they thought about themselves and to put music in the center of the picture. 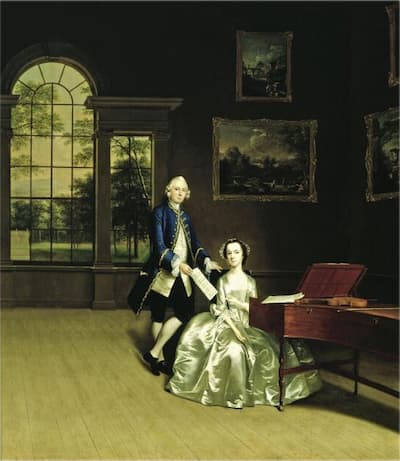 J.S. Bach: Sonata No. 2 for Violin and Harpsichord in A Major, BWV 1015: I. Dolce (Benjamin Schmid, violin; Anthony Spiri, harpsichord)


The music, musical instruments, and music making in the V&A collection is very different than those of more comprehensive collections. The emphasis on Asian art and on applied arts means that music and musical instruments become different parts of the art works – sometimes, as in the King René image, it’s used to declare the King’s territories; in the Indian Gujari Ragini, it’s a metaphor for a sound. All these different concepts make music hunting in the V&A an especially challenging (and rewarding) exercise!