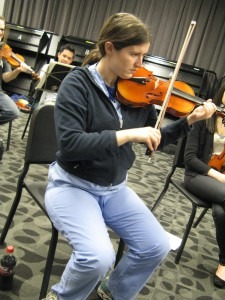 Michelle Murray, Adult Medicine and Pediatric Resident,
who came directly to rehearsal
after a full shift,
still wearing her "scrubs" !!

It was in the Fall of 2012 that an email went out to many of my colleagues in the Indianapolis Symphony Orchestra: we were in a stressful situation, with our having been locked out by our management because of our unwillingness to accept major reductions to our salaries, benefits, season length, and number of players. But this email wasn’t about the painful situation we had all been thrown into. It was about something we could do and have control over.

As has been done over decades, musicians in our orchestra and others do so much more than sit as hermits, locked away in practice rooms, learning orchestra parts, week after week, year after year, only coming up for air to join our colleagues to rehearse and “put on a show.” Many of us teach – privately and at schools and universities. And we also go out to volunteer in the communities around us helping with amateur groups, coaching orchestras, giving lessons, and teaching classes, where other such help might not be available. Upcoming concerts are frequent reasons for out heading out into the trenches. For schools, it’s Christmas or semester-end shows, and this past December we made the rounds, going to coach rehearsals as early as 7:30 in the mornings, when the kids first start their school days, and getting ready for playing everything from Rudolph with his glowing red nose to “Coventry Carol.” And then there was something rather unusual. 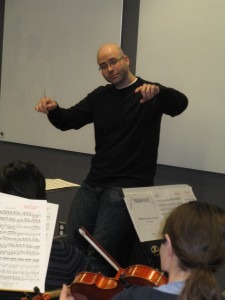 We were asked to help out with a college-level, amateur orchestra. My best friend from the ISO, Assistant Principal Second Violin Mary Anne Dell’Aquila, asked for help with a group comprised of players who had unexpected pedigrees. Violinist Katie Tsukahara first studied French and Math at UCLA. Percussionist Andrew Bosserma received his BS in Biology, Keyboardist Angela Choe received her undergraduate degree in neuroscience, violinist Jacob Son in neurobiology and physiology, flutist Kendal Herget in biology and psychology, bass player Mohineesh Kumar in biology and chemistry, clarinetist Jenny Lin her BS in chemical engineering from Cornell University, and trombonist Kevin Murray came from the Air Force. Flute and piccolo player Derryl Miller received his bachelor degrees from University of Notre Dame in biochemistry and math, and trumpet player Seneka Ratnayake had bachelor degrees in biochemistry and molecular biology. Other degrees received include those in exercise science, German, Spanish, bioengineering, international studies, population planning, and pre-veterinary science. And oboist Michael Moore, received his BM in oboe performance from the University of Cincinnati’s Conservatory of Music. But just like all of his colleagues in this orchestra, Michael is not pursuing a career in music. He is an anesthesiologist. 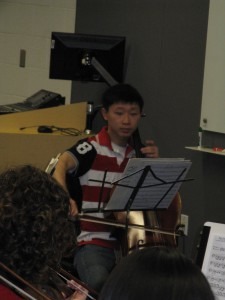 Remember Katie, the violinist? She’s planning on going into pediatrics. Drummer Andrew is in his second year of med school. Pianist Angela is in her fourth year of pediatrics. Jacob Son is a dental student, Kendal Herget is in ER medicine, Senaka plans on emergency medicine or neurology. And the incredible list goes on and on. You see — this orchestra is made up of medical and dental students, and those who are already working in those fields.

This is an all-volunteer orchestra, and its members receive no college credit for performing in it. They simply do it for the love of music, and for their own personal pleasure and stress relief! Poignant quotes for orchestra members about being in their present fields, rather than in music, include “the main driving force was job security and earnings. I knew a lot of musicians, and it became clear that unless you got a really good/consistent gig, it would be a relatively difficult life. I may never know if I made the right decision, but it is nice to be able to keep music as a hobby and not a ‘job’.” “I still love practicing, because it’s a way to relax from the stresses of life. Even more, each piece brings back some different memory, feeling, or experience — and each new piece creates new ones.” “School keeps me very busy, but this group helps me keep my talent alive.” “Playing the cello has been my go-to method of dealing with stress ever since high school. It is definitely something I enjoy doing whether it is practicing on my own or rehearsing with an ensemble.” “Playing in this orchestra has been a great, low-pressure way to get a chance to play with some very talented people.” 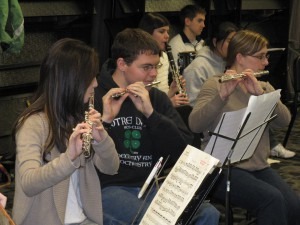 Oh, and yes, this orchestra does have a name! It’s the IU School of Medicine Orchestra, with IU being Indiana University. This is the second incarnation or generation of the group. Its origins go back over a decade, and Dr. Nancy Butler, violinist, pianist, and Associate Professor of Clinical Psychiatry says, “The IU School of Medicine had started a Self-Awareness, Self-Care and Personal Growth Curricular track that stated that students ‘should be proficient in self-care to better serve their patients.’ And it occurred to me that the students should not have to wait like I did for 25 years to return to the musical avenue of self-care. We needed to make it clear to them that a healthy physician was one who looked out for what nourished their soul — so that soul had something to give to others. And I am thrilled to be its faculty advisor and that we have found a dedicated champion in Dave Schurger.” 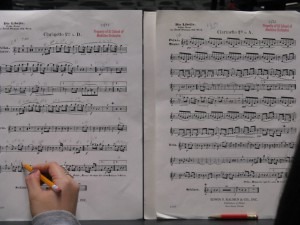 Dave is the present overseer and conductor of the IUSMO. “It was the summer of 2010 when my wife and I were with some friends at Rock Bottom Brewery here in Indianapolis, and we were joking that we were at rock bottom! A couple of our friends were with us, and since my wife Liz was also an oboist and music teacher, they asked if she’d be interested in taking on a new gig – conducting a med school orchestra. She said she couldn’t, and pointed at me and said ‘but he would!’ And in February of 2011, we had our first rehearsal.” Dave has his Bachelor’s Degree in Music Education from Ball State University, and has almost completed his Master’s in Conducting from Butler University. He says, “I started playing the drums when I was five. My parent got me lessons so I wouldn’t beat on my brothers.” It’s fortuitous that said beating went from the drums to beating time – with a baton. The orchestra’s formation was spread by word-of-mouth and emails sent to students and faculty. And for their first concert, they began rehearsing Bizet’s Carmen Suites, a Dvorak String Quartet, and some other try-out works. Soon to be added to their repertoire were Beethoven’s Overture to Egmont, Bernstein’s Overture to Candide, Mozart’s 40th, A Night on Bald Mountain, Grieg’s Peer Gynt Suite, music from Lord of the Rings, Pirates of the Caribbean, and Star Wars, and with soloists. And now they are able to schedule concerts twice yearly!

Needless to say, we ISO musicians “were in” and coached a session with them. And we coached some more. And this coming December (2013), we are joining forces with this incredible group of talented musicians, med faculty members, nurses, physicians, dentists, and medics, and we’re going to be putting on our own show together. We are playing a live concert at the James Whitcomb Riley Hospital for Children. Some audience members will be in the hall where we are playing. Some will be isolated to keep them away from germs and “cooties.” And the rest will be there in our hearts. And all because Music does heal: it heals the savage beast. It heals the sick. And it heals … the healers!