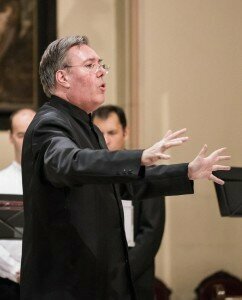 Spanish composers didn’t have what other European countries had: a central court. They did have the Holy Roman Emperor, in the form of Charles V and later, his son, Philip II, but those rulers preferred to hire musicians from the Netherlands rather than locally. That left Spanish musicians two options – go to smaller courts and churches or leave the country for positions in Italy, usually Rome.

Leading off Quondam’s Hong Kong Arts Festival program will be the full Mass of the Dead (Requiem Mass) by Tomás Luis de Victoria (1548-1611). Victoria started as a child singer at Ávila’s cathedral. When his voice broke, his talent was recognized and he was sent to Rome to study. He sang there under the greatest Italian Renaissance composer Palestrina. He returned to Spain in 1585 and became the personal chaplain and choirmaster of King Philip II’s sister, the Empress Maria. This requiem mass was written in 1603 for the death of Empress Maria and remains the masterpiece of Victoria’s work. 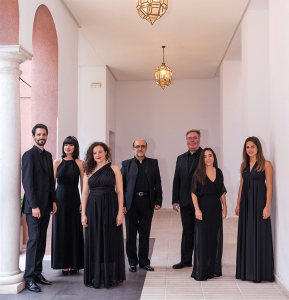 The Cathedral at Seville had an interesting progression of composers, and on the program that Quondam is presenting at the Hong Kong Arts Festival, they’ll look at three generations of composers: Cristóbal de Morales (1500 – 1553), Francisco Guerrero (1528 – 1599) and Alonso Lobo (1555 – 1617). Morales probably started as a boy singer in the Cathedral and was later made Maestro de Capilla; Guerrero was a boy singer under Morales and also rose to Maestro de Capilla; and Lobo followed the same course: he started as a boy singer in Seville Cathedral under Guerrero and was later appointed Maestro de Capilla. The influence of each composer’s teacher can be seen when they use their teacher’s music as the basis for their own mass settings.

The rise in interest in Spanish choral music outside the Spanish-speaking countries started in the 1920s. In London, the Westminster Cathedral Choir, under Richard Runciman Terry, started exploring the great Catholic music of the Renaissance, including Spanish sources, and started a tradition that continues to this day.

We asked Rupert Damerell, the director of Quondam, what plans were in the works. He is currently working on a 3-year project to record the complete masses of Victoria, which would include 18 masses and two requiems. In this look at one composer’s work, he’s been impressed with the way that Victoria expresses his theology in his text settings. For example, in a long text such as the Credo, which is generally set syllabically to get through the words, Victoria takes time to emphasize and highlight words in the text with particular theological importance. For example, towards the end of the Credo, the critical statement of belief, Et unam, sanctam, catholicam et apostolicam Ecclesiam (And (I believe in) one, holy, catholic, and apostolic Church) is emphasized. Listen, for example, at 04:30 of his Missa O quam gloriosum’s Credo, where all the counterpoint clears for an instant to sing this text.

Victoria: Missa O quam gloriosum: Credo (Oxford Camerata; Jeremy Summerly, cond.)
Damerell also spoke of how the music writing often reflected the architecture of the chapel or church where the music was to be sung. Whereas Italian churches are large resonant spaces, Spanish churches have enclosed choir areas, which permit a more focused and intimate acoustic.

The concert of music from Seville Cathedral will be a showcase for music that is rarely heard, performed by a choir that completely understands the source, and to show that the composer Victoria was just one of many illustrious composers who preserve the Spanish tradition.