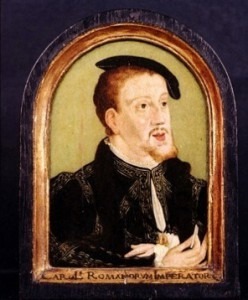 Cristóbal de Morales (c. 1500–1553) was the first Spanish composer of international renown. Two years after his death, the Spanish theorist Juan Bermudo — primarily known for his treatise on playing the vihuela — wrote, “for composing polyphony I would take as master the works of Adriano, of Christoval de Morales, and of Gomberth”. Bermudo simply identified the leading composers of his generation, as all three were known throughout Europe. Adrian Willaert and Nicolas Gombert, originally from the Low Countries, worked at the basilica of St. Mark’s in Venice, and the court of Emperor Charles V, respectively. Morales, on the other hand, spend roughly a decade at the papal chapel in Rome, and is credited with the composition of 21 masses, over 100 motets, 18 settings of the Magnificat, and at least five settings of the Lamentations of Jeremiah.

Missa Si bona suscepimus (1544)
Jubilate Deo (1542)
Although his career as a singer and his accomplishments as a composer are well documented, we have very little information regarding his personal life. We do know that he was born in Seville, capital of the autonomous region of Andalusia, but are not entirely sure of his exact date of birth. Scholars have scrutinized civic and church records and determined that he was most likely born in 1500. Although Morales claimed to have had a thorough general and musical education, there are no surviving records to substantiate his claims. We do know, however, that he was appointed maestro di capella in Ávila, in1526. In 1528, we find him in the city of Plasencia — a medieval settlement in the province of Cáceres in Western Spain — holding the same musical position but receiving double the salary. Morales was thoroughly convinced of his exceptional talents as a singer and composer, and was not able to work well with musicians he thought of lesser musical ability. In addition, he frequently alienated his employers, and resigned without rhyme or reason from his post in Plasencia in 1531. He completely disappeared for the next four years, only to turn up in the papal choir in Rome by September 1535. In fact, he was hired as a tenor singer in the Sistine Chapel choir. For almost a decade he was singing alongside Jacques Arcadelt and Costanzo Festa, and below the famous frescos Michelangelo had only completed in 1512. He also composed two mass settings on the famous “L’homme armé” tune, one for four and the other for five voices. Throughout both settings, the famous tune is clothed in functional harmony, and used as the head motif or as the cantus firmus. Both settings display a variety of textures, and characteristically feature a great deal of rhythmic freedom. They are incredibly difficult to perform, which unquestionably reflects the high quality of singers employed in the chapel. By 1544 Morales published two printed volumes of masses, thereby announcing that he was looking for a new job. Unable to negotiate for a higher salary with the pope, he resigned and abruptly left Rome in 1545. Initially, he returned to Seville and taught Francisco Guerrero, but soon took employment at the cathedral in Toledo. Not surprisingly, amidst financial quibbles, he resigned in 1547 and seamlessly moved into the service of the Duke of Arcos at Marchena. Once again, he was unhappy with his duties and responsibilities, and resigned in 1551. Morales spend the final two years of his life at Málaga cathedral — once again being dreadfully unhappy with the musical conditions and his salary — before passing away in the fall of 1553. During his later years, Morales wrote in a largely homophonic and dense musical style, but with the skill of a master craftsman he always considered the expression and understandability of the text. Sixty years after his death, he was still regarded as one of the finest composers of sacred polyphony, and the 18th century biographer Andrea da Bolsena praised him as the papal chapel’s most important composer between Josquin des Prez and Palestrina.

Please click here to read about “The Golden Age of Spain in Music, Arts and Architecture”.