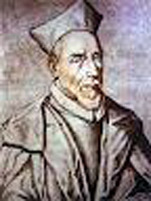 In 1589, Francisco Guerrero (1528-1599) the most prominent Spanish composer of the generation between Cristóbal de Morales and Tomás Luis de Victoria, embarked on a pilgrimage to the Holy Lands. He departed Venice on 14 August and traveled via the island of Zakinthos to Jaffa, Damascus, Bethlehem, and Jerusalem. Once he returned to Venice on 9 January 1589, he prepared for the publication of his second books of motets, and for his return trip to Spain. However, on route to Genoa, pirates hijacked his ship and threatened his life. They stole his money and extracted a heavy ransom before Guerrero was allowed to continue his journey.

Ave Maria gratia plena a 8
Duo Seraphim
Missa pro defunctis No. 2, “Requiem Mass” (excerpts)
Just a couple of nautical miles closer to Genoa, a second set of pirates — undoubtedly related or having been informed by the first — repeated the same procedure. Guerrero eventually returned to Spain — resuming his duties at Sevilla Cathedral — but he was financially ruined. He quickly published a book about his journey to the Holy Lands, but this emergency measure did not alleviate his financial difficulties, and at age 62 he was committed to a debtor’s prison. Fortunately, the Cathedral Chapter paid his creditors, and Guerrero was released from prison. Undeterred, the composer was preparing for a second journey to the Holy Lands — it took him almost a decade to secure the necessary funds — when a plague epidemic unexpectedly took his life in 1599.

The colorful life of Francisco Guerrero began in Seville in 1528. Musically self-taught —with a little help from his brother Pedro — Francisco was engaged as a contralto at Seville Cathedral in 1542. Three years later, he caught the eye of Cristóbal de Morales, who had recently terminated his employment in Rome and returned to Seville. Morales immediately recognized the musical abilities of the young Guerrero and agreed to instruct him in the art of composition. In fact, it was the recommendation of Morales that secured Guerrero an appointment as maestro de capilla at Jaén Cathedral at the tender age of 17. Guerrero, however, was preoccupied with composition and experienced horrible bouts of homesickness, thereby neglecting his duties. He was on the verge of being dismissed, yet still took as much holiday as possible to visit his hometown. In 1549, he secretly accepted an appointment as singer at Seville cathedral, and quickly turned his back on Jaén Cathedral. In 1551 and again in 1554, Malaga Cathedral offered him the post of maestro de capilla, however, Seville was eager to retain his services and appointed him associate to the aging Pedro Fernandez. Concurrently, he began to publish collections of his music in Seville, and since he also traveled extensively, in Venice, Paris and Louvain. He even presented an anthology of his motets to Emperor Charles the V. After 23 years of traveling throughout Spain and Portugal, and serving as an assistant to Fernandez, Guerrero finally became maestro de capilla of Seville Cathedral in 1574. He continued to travel, and visited Rome in 1581, where he published two large collections of his music. He returned to Spain in 1582 to attend to the needs of Seville Cathedral before embarking on his pilgrimage to the Holy Lands in 1589.

Throughout his life, Francisco Guerrero was known as “El cantor de Maria”, because his motets on texts praising the Virgin constitute some of the most beautiful compositions of the period. “Ave virgo sanctissima” generates intense emotions within a restrictive canonic structure, and the eight-part “Ave Maria” delights with smoothly diatonic melodies and homophonic interpolations within a functional harmonic fabric. Guerrero also published 18 complete mass settings and 150 liturgical compositions and motets. However, he was also a prolific composer of secular songs, not only setting texts by local Andalusian poets, but also by the greatest Spanish dramatist of the age, Lope de Vega. Following his death, his music continued to be widely performed, not only in Spain, but also in the cathedrals of Latin America. In fact, a copy of his unknown “Magnificat secundi toni” was accidentally discovered in Lima Cathedral as recent as 1974.