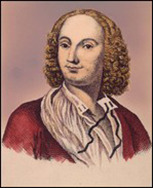 Amid anguish and torment,
Lives the contented soul,
Chaste love, its only hope!

Musical inspiration is one aspect, but things got a bit dicey in the gossip column when Vivaldi, who had been ordained as a priest in 1703, asked Anna and her elder half-sister Paolina to move in with him in 1724. Such arrangements were not particularly uncommon as priests habitually employed housekeepers who dedicated their lives to this kind of services. But Anna was special! In opera after opera he wrote roles specifically for her talents, carefully crafting the music to her particular vocal strengths and weakness. No other singer received such consistent attention and privilege from the composer. It’s hardly surprising that rumors were rife about a possible sexual relationship between Anna and Antonio. Contemporary gossip mills went into overdrive, openly suggesting that the famous 18th-century “Red Priest” might be a sinner and not a saint. Of course, Vivaldi was an easy target as he also played the role of music master and composer to hundreds of young girls living at the La Pietà orphanage. Writers and filmmakers throughout the ages have liberally fantasied about the erotic potential of this scenario, with the famous priest exploiting the privileges of the cloth.

In 1738 Vivaldi was refused entrance to the city of Ferrara where his opera Farnace was to be performed. The city’s cardinal was making a moral point, disapproving of a priest involved in the frivolities of the operatic world and living under the same roof as a female singer. Vivaldi adamantly denied any romantic relationship in a letter to his patron Bentivoglio dated 16 November 1737. “His Eminence Cardinal Ruffo has commanded me not to come to Ferrara to mount opera, because I am cleric who does not say Mass, and because I am friends with the singer Girò …Over the past fourteen years we have appeared together in many European cities and their modesty was everywhere admired, and the same can be said of Ferrara. They make devotions every week, to which sworn and authenticated records attest. It is impossible to perform the opera without La Girò because it is impossible to find another prima donna of her caliber. Also, I have not celebrated Mass in twenty-five years and will never say Mass again, not because of an interdiction or an order, but because of my own decision owing to the ailment from which I have suffered from birth and which still afflicts me.” The ailment Vivaldi referred to as “strettezza di petto (tightness of the chest) was probably bronchial asthma and variously afflicted him throughout his life. As to Girò, there is no evidence to indicate anything beyond friendship, fatherly care and professional collaboration.