What on earth is mood music? As a composer, I write music to offer or extract a certain feeling from a listener, but do I intentionally create music to suit a mood or a place? Not that I’m aware of.

Muzak is a weird description of a particular type of music that has its origin somewhere in the 1920s. But, was any composer back then really creating music to fit a mood? Light music might be another term for mood music. The general explanation behind light music is it does not make you think or feel. Yes, music that leaves you feeling nothing. It just exists to fill the aural background, to distract us from the fear of nothingness.

It’s sort of interesting that in the 1920s that the term muzak and the first movie music came about. The first “talkie” also had music. This was The Jazz Singer, released in October 1927 to be precise. Was jazz music back then meant to be mood music? No. But is it a coincidence that the term Muzak first sprang to life when movie music did? I’d say no because early movie music was mostly source music used to fill the background of the action.

There’s no real consensus about what mood music is. Some use the term to denigrate composers, singers, and bands that they feel create music that is twee, naff, or lightweight. Maybe the sounds of heavy metal music can never be described as light music, but you might be surprised about the arguments around who can call themselves heavy metal musicians. This argument is a lot like the fights between soft rock and hard rock aficionados.

The classical music world does not escape the arguments around what is heard as light music and what is seen as serious music. When I was growing up, I fell in love with the music of the English composer Albert Ketèlbey. His compositions are regularly put into the category of light music. This categorisation has probably more to do with the titles he gave his pieces that see his music confined to the classification of light music. Such as his music for a Bank Holiday. Then there’s his theatrical piece called In a Chinese Temple Garden.

Colourful, dramatic, well written and beautifully orchestrated music this is. For me, there’s nothing lightweight about Ketèlbey’s music. If it fits a mood, it’s his titles that do this. 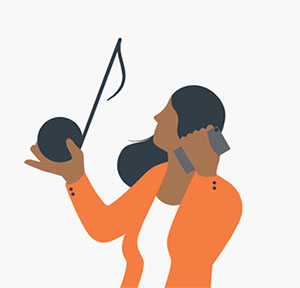 Wallpaper, and, my most hated term, elevator music are other names for mood music. On hold music is another category of mood music. I have no idea what sort of mood people are supposed to be in when on hold on a phone call or riding in a lift. And, by the various types of music that one hears when in these situations, neither do the people who program this mood music.

Here’s a short example of elevator music. Call it an earworm if you like, but as I wrote in an earlier article, Is There a Language in Music? the way we define music is through our thoughts and philosophies and the labels ascribed to it.

That said, there is a special feeling we get when we hear sounds that are classed as mood music. It’s a sort of inner cringing. It leaves us feeling uneasy, and makes us wonder why does someone think that this music will make me feel better or distract me from the inconvenience of being put on hold or interminably waiting for something?

Technically speaking, there are things you can do to music to make them sound like the continuous, repetitive patterns of wallpaper, and it’s not nice. Back in the 1970s, there was an Australian band called Essendon Airport, they wrote experimental music. On their album, Sonic Investigations Of The Trivial, they have a song titled Wallpaper Music. This is a tongue-in-cheek version of what a piece of mood music sounds like. Do you get a vision of wallpaper when you hear this?

Whatever mood music is, the sound of it is probably instantly recognisable to us; it screams out boredom. It’s clearly not exciting stuff. You could start or stop it anywhere and it would still sound the same and leave you feeling in a similar mood. Music for mood regulation is a thing, but today, as there is music for any mood that anyone can feel at any time, I’ll leave you with a favourite piece of mood music that gets you In the mood. You know what I’m talking about, and that’s dancing.