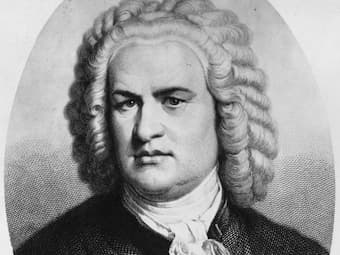 When we hear the toccatas of Bach, we’re hearing the written representation of something at which he was a master – free improvisation at the keyboard. When we have a paired piece, such as a toccata and fugue, we have a combination of Bach at his most free and his most strict. It’s those contrasts that make so much of what we know about Bach come to us through his music.

Even in a work that’s an imitation of what he could do improvising, the toccatas also underwent some changes in Bach’s hands. He examined the formal scheme and started to develop a more coherent aspect to the improvisational part. In the toccatas, he also felt free to bring together Italian, and north German influences, showing us just how much he had learned from the music he listened to.

The Toccata in C minor, BWV 911, was composed before 1714, at a point in time when he was writing a lot of toccatas and other works for the harpsichord. 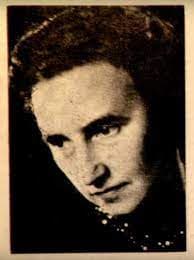 The toccatas at this time always contain fugues and, in the case of BWV 911, there are also brilliant gestures and vocal-like recitatives. BWV 911 is a piece of concentrated virtuosity, as one writer said. Another writer likened the toccatas to being Bach’s ‘Grand Sonatas’ for harpsichord, filled with extravagant flourishes and flashing scale passages. They have an air of ‘kaleidoscopic brilliance,’ but at the same time, their sparkle is sincere and not just mere gilt.

Most of Bach’s toccatas follow a similar form: a bright and fast opening which may be an imitation of the French free prelude form, a fugue or fugal movement at a fairly brisk tempo, a lyrical passage almost like a recitative, which combines an Italian aria style with the north German fantasia style. A second fugue at an Allegro tempo ends the piece. For BWV 911, the opening is at a moderate tempo, the following fugue is unusually extended, and there’s a short Adagio appended on the end, acting like a kind of coda.

The Toccata in C minor is a poet’s utterance; as a minor key, there’s a certain amount of melancholy but it’s not an unhappy melancholy of the North German pervades it. It is almost like church music translated into a drawing room harpsichord.

The clavecinist, Helma Elsner, made this recording in Stuttgart in 1958. She studied at the Essen and Berlin conservatories. Upon graduation with honours, she taught for four years at the Folkwang School in Essen while she took graduate courses. Specializing in harpsichord, she toured extensively and recorded the music of Bach, Handel, Telemann, and Bach’s sons. 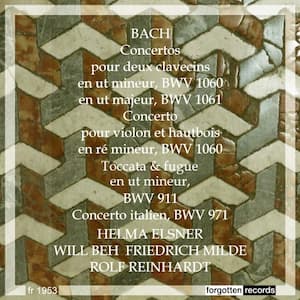