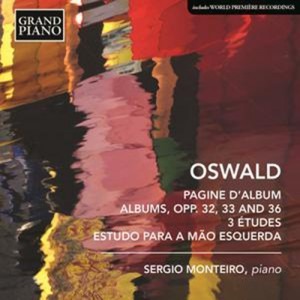 Henrique Oswald was one of the most important composers in South America in the late 19th and early 20th centuries. His European-influenced music was suppressed by Brazilian nationalist sentiment in the 1930s and 40s, but on Oswald’s death Villa-Lobos described him as “the most admirable composer of this country”. This programme provides an excellent overview of his stylistic development, from the youthful, salon music aesthetic of Pagine d’album to the French impressionism of the Album Op. 36 and the masterful Trois Études.