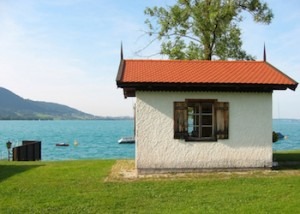 Friedrich Rückert was professor of Oriental languages at the University of Erlangen and Berlin. A master of more than thirty languages, he principally made his name with a number of highly esteemed translations of Oriental poetry. However, he also started writing poems conceived in the spirit of the Oriental masters. This poetry, much of it published after his death in 1866, provided the inspiration for musical settings by Clara and Robert Schumann, Johannes Brahms and Gustav Mahler among numerous others. At the turn of the century, Gustav Mahler suddenly collapsed in his apartment, and only an emergency operation for an intestinal haemorrhage was able to save his life. This traumatic experience profoundly changed not only the man, but also the composer. Leaving behind the folk poetry of the Wunderhorn he turned his attention to the writings of Rückert. The intensely personal tone, oriental flavor and intellectuality expressed in these poems clearly resonated in Mahler’s own imagination. Paired with a “completely new musical style” that emphasized linear clarity without sacrificing complexity, Mahler’s Rückert settings created a new link between music and literature, and also between the Lied and the Symphony.

Composed between 1901 and 1902, the Rückert Songs do not constitute a true song cycle, but are variously arranged and presented in performance. “Blicke mir nicht in die Lieder” (Do not look into my songs) is lightly scored, and the agitation in the vocal line apparently suggests Mahler’s expressed annoyance at having his works examined before they were complete. The small ensemble does not partake in shaping the melody; it simply provides the perpetual motion that accompanies the vocal line. It has been suggested that the orchestral opening discloses a thematic connection to his unfinished Tenth Symphony. “Ich atmet’ einen linden Duft” (I breathed a delicate fragrance) captures the wistful atmosphere of romance hinted at in the text. Celeste, harp, single winds and strings create a dreamlike atmosphere that is completely untouched by melancholy. A simple Celeste arpeggio initiates the rhythm of a lullaby, and introduces a gentle diatonic vocal line. Providing occasional touches of harmony and soft delicate hues, the ensemble continues to support a vocal line that introduces pentatonic intervals in the second stanza. This gentlest of setting—the music never rises above a pianissimo dynamic level—concludes with the Celeste arpeggio with which it had began. 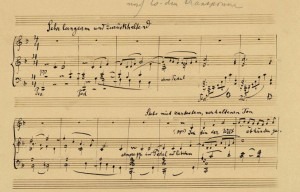 “Um Mitternacht” (At Midnight) searches for the fundamental questions of existence, and the relief from fear, pain and suffering. This nocturnal meditation features stark instrumental sonorities, sparse orchestration, expressive intensity and obsessive rhythms. Recalling his near-death experience, Mahler forces the music into the low register, and an incessant heartbeat rhythm not only suggests anxiety, but also implies the passage of time. In addition, downward spiraling passages expose a sense of utter loneliness and a frightful descent into depression. The final stanza finds the answers to life’s questions in the simple faith in God. Written as a love song for Alma Mahler, Liebst du um Schönheit (If you love for beauty) was composed in considerable haste. In fact, in Mahler’s hand, it only exists in a piano version, but has since been variously orchestrated. Above all, this intimate song expresses tender sentiments without the “Angst” we so frequently encounter in Mahler’s music.

Retreating from the outer to the inner world, “Ich bin der Welt abhanden gekommen” (I am lost to the world) conveys a symbolic death, through which the narrator is alienated from the external world, eventually attaining a blissful and isolated serenity. Apparently, Mahler so strongly identified with this poem that he proclaimed, “It is I myself.” In his musical setting, Mahler creates a dream world that mirrors the inner world of human emotion. Chamber-like scoring that briefly spotlights virtuoso passages exposes a completely new level of contrapuntal clarity. A plaintive pentatonic melody in the English horn hauntingly emerges and elides with the entrance of the voice. The melodic phrases are highly irregular, and dissonant harmonies the result of winding instrumental passages. The vocal melody is constantly shadowed by related melodic ideas in the orchestra, and the text gradually reveals that inner peace can only be achieved through Art. In Mahler’s hands, this poem is transformed into a musical and psychological masterpiece.