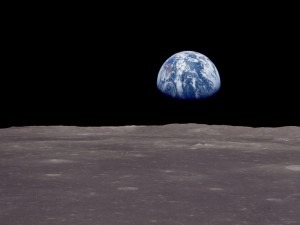 In 1968, humanity collectively experienced an “Aha Moment.” And it was the photograph “Earthrise” that triggered this moment of realization, inspiration, insight, recognition and utter astonishment. One of the most influential photographs ever taken, it shows our “blue marble” gently rising against the barren and desolate surface of the moon, with both celestial bodies racing through the vast and utter darkness of space. It forever changed the way we thought about our environment and our species, and redefined our place in the universe. These fundamental shifts in human consciousness don’t happen every day; they possibly come around once a generation, and they are certainly not confined to the world of space exploration and science!

As a young and eager piano student slugging my way through various etudes by Czerny and Cramer, I had the opportunity to attend a music festival in the sleepy Austrian village of Ossiach. And when György Cziffra sat down and played a Liszt Ballade, a completely new and unknown universe suddenly opened up to me. Otherworldly strains of color and delicately nuanced emotions alternated with visceral power that threatened to bring the roof down! At that moment, at least intuitively, I understood that my level of consciousness had been raised, and that it was impossible to ever think of the piano in the same way again. Ever since, I have been looking and listening for “Earthrise Moments.” And while my Cziffra experience on that day was highly personal, there have been a number of great performing artists and ensembles throughout the 20th century that have fundamentally changed the way we collectively think about music!

And that’s the basic idea behind our new series, titled “Musical Giants of the 20th Century.” Aided by sound and video recordings, and looking at defined areas of the performing arts, we will try to document these musical paradigm shifts. From Toscanini ushering in a completely new orchestral consciousness to Glenn Gould humming his highly expressive counterpoint to a Bach fugue! From Maria Callas to the Hilliard Ensemble and to Martin Fröst, we will explore what made them stand out from the crowd. This is not a series focusing on biographies, but one that looks at interpretation, technique, popular appeal and demographic, performance style, special recordings and even self promotion.We all know that such lists are highly subjective, so we are counting on your input, comments and expertise in identifying artists that come around once in a generation!