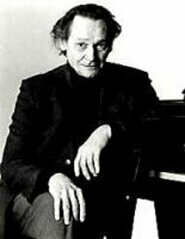 Truth be told, as a young aspiring pianist I could never get my head around the music of Alexander Scriabin! Despite the best intentions of my teacher, and supreme technical challenges aside, I simply did not understand his musical syntax. His use of extended and enhanced harmonies was not the problem, but his sense of musical line, texture and desired tone color left me utterly befuddled. I am still not proud of it, but I basically gave up on Scriabin. And then I heard a recording by the Russian pianist Igor Zhukov, and everything changed. Like an emotional dream, the kaleidoscope of lines and colors melded into a single fantastic lyricism. Supple rhythms and an almost lazy approach to pedaling congealed the music into an incandescent universe constantly teetering on the verge of collapse. I was absolutely speechless; I had never heard an interpretation like this before, and I certainly did not know Igor Zhukov.

Apparently, Zhukov had very little interest in traveling abroad, and not afflicted by the utterly annoying disease of constant self-promotion, he was relatively unknown in the West. Born in Nizhny Novgorod in 1936, his family moved to Moscow, but was evacuated to Kirov during World War II. Once they were allowed to move back to Moscow, Zhukov started his musical training at the Moscow Conservatory preparatory school, and entered the Conservatory proper in 1955. Initially he took lessons from Emil Gilels, and subsequently from Heinrich Neuhaus, and his first significant concert appearance already featured the music of Scriabin. By the time of his graduation in 1960 he already had won second prize in the Long-Thibaud Piano Competition in Paris. However, Zhukov was not only a concert pianist, he also founded the long-running Zhukov Piano Trio in 1963. He was the conductor with the Moscow Chamber Orchestra, worked as vocal accompanist, and produced various editions and arrangements. He gave up conducting in 1994 and concentrated on the mechanics of recording. “I am the best pianist among recording engineers,” he quipped, “and the best recording engineer among pianists.” He left an extended legacy of recordings ranging from Bach to Prokofiev, but his Scriabin—in my humble opinion—is almost without equal.