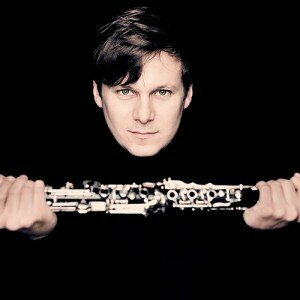 Sebastian Manz achieved fame as the first person to win the top prize in the ARD clarinet competition in 40 years. Nowadays, in addition to his bustling solo career, he holds the position of principal clarinet with the Southwest German Radio Symphony Orchestra (SWR), and tours frequently with his quintet, Variation 5.

Growing up, Sebastian sang in a boys choir in Hannover. ‘In the choir I learned how to phrase, to use the breath. I kept this, and this helped me a lot with the clarinet,’ he remembers. As a child, he remembers hearing Benny Goodman’s recording of a movement of Weber’s second Clarinet Concerto on a compilation CD. It was a live recording,’ he says, ‘it wasn’t perfect – but he played it with such an energy, with great drama. He really performed it, like only a jazzer could do. That was the inspiration for me to be as good as him.’ On the other side he remembers being struck by Sabine Meyer’s ‘possibilities for sound, for technical perfection’, with whom he went on to study in Lübeck.

Another musician who continues to inspire Sebastian to this day is Leonard Bernstein: ‘For me, he is the Mozart of the 20th century. He continued what Gershwin began: he composed these great musicals, and at the same time he was an unbelievably great conductor.

‘I talked to some of the musicians in the Vienna Philharmonic who played the Mahler Symphonies with him, and they said they saw him as their reincarnation of Gustav Mahler.’

Sebastian believes strongly in individual presentation of the artist – but that it should never come before the music.

‘I’m always talking about the pieces to the audience. They’re always so thankful, not just for the information, but for the point of view of us musicians. A lot of people told me that not many musicians do this. It’s a question of how you present the music today. Social media, videos, are more important nowadays. 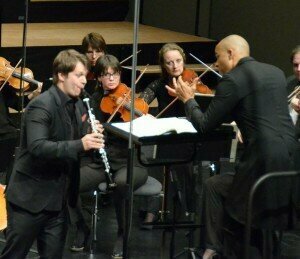 ‘Of course for us musicians, the music should always be in the centre, it should be the most important thing. I have friends who do it too much. Facebook, the internet… they’re posting and not practising. They’re changing their clothes, taking a photo, then going home. Don’t waste your time only in the digital world! As a musician you have to live your life. If you’re rehearsing and practising 25 hours a day in a small room, you don’t see life, you don’t drink, you don’t laugh. You have to have these experiences.’

For Sebastian, these extra experiences came around 2007 when he was studying in Lübeck. Continuous setbacks from competitions and classes in school led to a change in perspective.

Outside of music, sports and cinema lie close to Sebastian’s heart, running and sci-fi being his two ways to rest. His omnivorous musical taste – electro swing, AC/DC, the Beatles – is put to good use in his arrangements, be that his highly literal interpretation of Gershwin’s Promenade – Walking the Dog, or his AC/DC / Elvis medley for piano and winds, which proves a hit at the end of concerts. ‘At the beginning we were afraid to play it after Mozart, but every time the audience went wild! That shows me it’s good music, but that we have to present it in an individual way: don’t be afraid!’