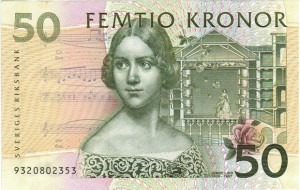 Who’s on your banknote? We took a survey of European bank notes and found a gratifying number of women singers and one composer who’ve appeared, past and present.

Between 1996 and 2003, the Swedish Riksbank produced the Jenny Lind 50-kronor banknote. It was withdrawn from circulation at the end of 2013 so that they could add new security features to the new notes. The Swedish Nightingale is shown in portrait mode against a background of a stage production of Norma, one of her signature roles.

Before the Euro, Germany put Clara Schumann on their 100-Deutsche mark note. Her image is from a lithography by Andreas Staub done in 1835. Behind her a various Leipzig buildings and a lyre to represent music; on the back of the note is a grand piano and the Hoch Conservatory in Frankfort. This note was in circulation from 1990 until 2001 when all national currency was replaced by the Euro. In Germany, the 100-DM was called the Clärchen (Little Clara).

C. Schumann: Deuxième scherzo in C Minor, Op. 14 (Susanne Grutzmann, piano)
Continuing in its musical mode, the Riksbank will be issuing their 500-kroner note with an image of dramatic soprano Birgitt Nilsson against a production of The Ring Cycle in the background. The red banknote will be issued in 2016. For those with excellent eyesight, her hair will contain a list of her roles done as a single word in Swedish in micro-text (you might need a magnifier!): AGATHEAIDAAMELIAARIADNEBRÜNNHILDEDONNAANNA
ELEKTRAELETTRAELISABETHELSAFÄLTMARSKALKINNAN
FÄRGARFRUNISOLDEJUDITHLADYMACBETHLEONORELISA
MINNIEORTLINDEPENELOPEREZIASALOMESENTASIEGLINDE
SIGRUNTOSCATURANDOTURSULAVENUSWOGLINDE (In English: Agathe, Aida, Amelia, Ariadne, Brünnhilde, Donna Anna, Elektra, Elettra, Elisabeth, Elsa, the Marschallin, the Dyer’s Wife, Isolde, Judith, Lady Macbeth, Leonore, Lisa, Minnie, Ortlinde, Penelope, Rezia, Salome, Senta, Sieglinde, Sigrun, Tosca, Turandot, Ursula, Venus, Woglinde)

Wagner: Die Walküre, Act III Scene 3: War es so schmählich, was ich verbrach (Birgit Nilsson, Brünnhilde; Thomas Stewart, Wotan; Metropolitan Opera Orchestra; Berislav Klobucar, Conductor)
Australia honored their own soprano, Dame Nellie Melba on their 100-dollar note in 1996. Behind her rather stylized portrait is the cover of her homecoming concert program from 1902. She was the first Australian singer to achieve an international recognition, beginning with her debut in 1887 in Verdi’s Rigoletto in Brussels. Notice that the polymer window shows that most musical animal: the lyrebird.

Verdi: Rigoletto, Act II: Caro nome (Nellie Melba, Gilda)
Norway honored their Wagnerian soprano Kirsten Flagstad on their own red 100-kroner notes starting in 2006. She appears against the new Oslo Opera House, which was completed in 2007. The back side of the note shows the People’s Theatre (Folketeatret) building which had housed the Norwegian National Opera until the Oslo Opera House opened. 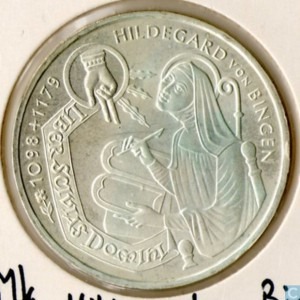 It’s not every musician who has a commemorative coin issued for their 900th birthday, but Hildegard of Bingen was so honored by the German government in 1998. The 10-Deutsche Mark coin shows her with quill pen in hand, receiving inspiration from heaven. Although commemorative coins in Germany have been issued for composers such as Beethoven (200th birthday in 1970), Walther von der Vogleweide (750th anniversary of his death in 1980), and Mendelssohn (175th birthday in 1984), and, Hildegard is the first woman composer to be so honored. The edge of the coin says “Wisse die Wege des Herrn” (Know the ways of the Lord) 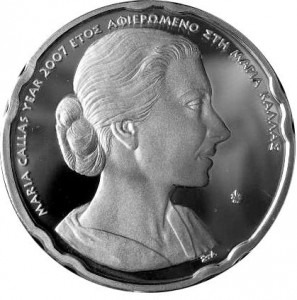 On the 30th anniversary of the death of Maria Callas in 2007, the Greek soprano was honored by a commemorative coin by Greece. Although she was actually born in New York, she received her musical training in Greece and strongly identified with her country.

Bellini: Norma, Act I: Casta diva (Maria Callas, Norma; Milan La Scala Orchestra; Tullio Serafin, cond.)
We need a circulating composer! The Clärchen was withdrawn with the advent of the Euro, and the Hildegard was a non-circulating commemorative! Who would you put on your currency? Germaine Tailleferre or Francesca Caccini on the Euro? Ethel Smyth on the British pound? Rebecca Clarke on the US dollar?