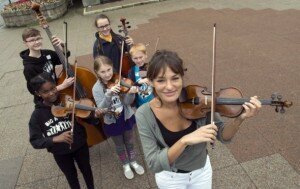 When I was a young student I sought out the best teachers, practiced many hours, and performed a great deal of repertoire with the ambition to land a position in a major orchestra. I thought playing well would be enough to sustain my career. Looking back, I realize now there are many other qualities necessary to manage a successful life in music. Certainly, I didn’t imagine how many types of presentations I would be involved with.

Self-Promotion is a necessary evil. Any engagement will require time and effort to establish the date, the repertoire, and to recruit other musicians. You’ll need an imaginative bio, photo, and video if you have one, and explain the set-up and technological needs. But mundanities aside, you’ll need to be convincing. Attempt to stand out by offering something different from what other instrumentalists offer. Be willing to lead your audiences on a journey.

Your audience will love hearing about the music you are performing, or about your instrument, especially if it is peppered with anecdotes about the challenges you have faced with the pieces. I recall rushing from an orchestra rehearsal to an afternoon recital for a group of University Women. The timing was tight. I barely had time to get my cello out of the case before we were on. My pianist and I performed some Beethoven and then Piazzolla’s Grand Tango. Breathless after the last flourish, I realized it was an opportunity to illustrate the rigors of playing an instrument. Dramatically gasping for air, our audience laughed. I demonstrated how physically taxing some passages are, spoke about the history of the Tango, and Piazzolla’s virtuosity on the unusual instrument the Bandoneon.

Piazzolla: Le Grand Tango
Design unique experiences with creative and attention-grabbing programs in intimate or uncommon venues. One of my ventures off the Orchestra Hall stage was at a disco/bar. Despite the smoky smell and dim lighting, I played Bach and two encore pieces—Fauré’s Après un Rêve and Ravel’s Habanera. The attendees sipped their beer or cocktails and listened with a collective concentration—a rare enough experience. They’d never been “up close and personal” with a performer before. The intimacy allowed each listener to dwell for a moment in deeper realms, and to surrender to the emotions of classical music.

Fauré: Après un Rêve
Today musicians are setting a high bar for inventive and inspiring performances. Bach in the Subways has become an international movement. By no means restricted to subways, Bach is being performed anywhere, anytime, in coffee shops, churches, on the street, and wherever there are people to hear great music. This season, Yo-Yo Ma takes on a transformative, humanistic endeavor. Believing that culture connects and changes us, he has embarked on a two-year Bach Project performing all of the Six Solo Bach Cello Suites in 36 concerts on 6 continents. Each appearance is followed by conversation, collaboration, and engaging with the local community—36 days of action to create understanding and shape a better future.

Smaller communities may interest you. In 2016 the cellist Amit Peled took a road trip with his priceless 1733 Matteo Goffriller cello, formerly owned by Pablo Casals. Peled hoped to follow in the footsteps of Casals who would perform in small towns, and not only the well-known concert halls in major cities. Peled loaded his family, his cello, and a barebones platform, and stopped wherever the mood took him. He encountered people in these towns who had never heard a cello before, and people who remembered hearing Casals himself!

Nicola Benedetti is fiercely committed to music education. In addition to being a riveting violinist she has established The Benedetti Foundation and a video series “With Nicky”, to guide, inspire, and inform students and music teachers, and to promote musical and civic engagement. Watch Nicola and Wynton Marsalis play with the National Children’s Orchestra of Great Britain. It’s inspiring!

Flash mobs in train stations, airports, or on trams are also a relatively new and delightful phenomenon. Orchestras are experimenting with “rush hour” and sensory friendly concerts, playing film scores in their concert hall, and going out into their communities. A small ensemble of brass players of The Minnesota Orchestra regularly perform in craft beer establishments. 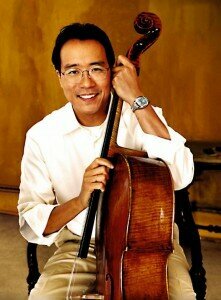 After hearing about 70 deaths among the homeless population early in the winter of 2017, in Toronto, conductor David Bowser put out, “a call to arms, but for music, on Facebook.” Within days the arts community rallied with “Musical Acts of Kindness.” That year, they filled a church for a concert, which raised much-needed funds. The escalating crisis resulted in the formation of The Musical Acts of Kindness Foundation. This year, funds raised for a pay-what-you-can concert at the Church of the Redeemer will go to the Bloor-Yonge Outreach Network. The musicians and behind the scenes organizers work pro bono.

Not all of us can afford to play for free for even such enlightened and service–oriented performances. Advocating for music and teaching young people is rewarding, and an avenue for funds. Playing home concerts, or in nursing homes and hospitals, and passing out a hat, are popular ways of earning much-needed cash.

You may not feel comfortable performing on a glass cello with a loop like this video,

or playing Phantom of the Opera in a cello quartet,

but you can engage with other local artists, dancers, and composers. Specialize in the work of a contemporary or neglected composer, or dream up partnerships with people in other fields such as scientists or mountaineers, storm chasers or volcanologists, cardiologists or biologists to reach new audiences.

If we believe in the power of our music, we must be willing to take our music to listeners. We need to be stewards, serious about the importance of culture to society, especially when there is so much to divide us. Our music enriches lives and generates bonds between performers and audiences, which few other endeavors do. Playing well is only the beginning. Our role and responsibility is to act as critical instruments of change.