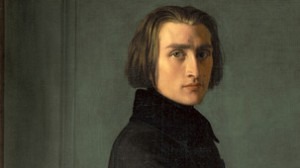 One of the foremost musical personalities and arguable the greatest virtuoso of his day, Franz Liszt (1811-1886) expanded the technical limits of the piano and the performer in both his own playing and in his compositions. However, what really distinguished Liszt from other virtuosi pianists of his time was his insight that virtuosity was not a peripheral part of music. Rather, it was capable of participating, at least in principle, in the “Romantic Revolution”. And a significant part of this revolution was a social phenomenon that the writer and critic Heinrich Heine dubbed “Lisztomania”. It describes the frenzied and utterly hysterical audience reaction towards Franz Liszt and his performances. In essence, his personality and playing were capably of eliciting a level of mystical ecstasy from the audience. And it goes without saying that this first modern superstar of the stage had his way with the ladies. According to Adelheid von Schorn, who religiously followed Liszt wherever he performed, “women simply threw themselves at him,” ruefully adding “it really does little credit to our sex”. Tall and handsome from any angle with Hungarian paprika pulsing through his veins, and simultaneously capable of transforming the piano into an altar — predominantly to worship himself — this highly observant and intelligent man exuded a magnetism that was partly based on personality cult, and also on a deeply spiritual inclination. After all, he was deeply religious, and from an early age he yearned to become a priest. “I dreamed myself incessantly into the world of saints. Nothing seemed to me so self-evident as heaven, nothing so true and so rich in blessedness as the goodness and compassion of God. Nothing and nobody has ever been able to shake my faith in immortality and eternal salvation”. Well, almost nothing, but priesthood had to wait for a bit because temptation came in the angelic and blue-eyed shape of Caroline de Saint-Cricq. She was sixteen, he was sixteen and teaching her how to play the piano, among other things. Liszt wrote to a friend “I have found a maiden chaste and pure as the alabaster of holy vessels”. 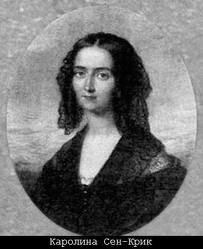 After the death of Liszt’s father, Franz and his mother settled in Paris, with the young lad giving piano lessons to the sons and daughters of Parisian aristocracy. Caroline was the daughter of Count Pierre de Saint-Cricq, who was minister of commerce under Charles X. Initially, the piano lessons were supervised by her mother, but there was no denying that the two teenagers were madly in love. Her mother was, from the very beginning, supportive of the relationship. She probably liked to listen to the four-hand arrangements of popular operas, which also allowed the young couple to sit close and innocently touch each other. Shortly before Caroline’s mother got gravely ill and died in June of 1828, she pleaded with her husband to let the young couple be happy. The count, however, unaware of the youthful relationship did not take her wish seriously. Although the piano lessons stopped during the period of mourning, Liszt continued to make rather frequent visits to the house. Once the lessons resumed, with daddy often called away on government business, the young lovers could go about expressing their feelings entirely without supervision. One evening, after a particularly intensive and deeply probing sight-reading lesson, Liszt did not leave the house until long past midnight. However, in his youthful exuberance and elevated state of mind, he forgot to tip the porter on his way out. In turn, the servant quickly informed Count Pierre, who was happy to dish out a bit of bad news for Franz. A quick reminder of the respective class difference between Caroline and Franz quickly ended the piano lessons. In addition, Franz was not to return to the house, nor see his daughter ever again. Daddy Pierre also quickly arranged for Caroline to marry Betrand d’Artigaux, the son of a fellow government minister, who dabbled in property and cattle. Liszt was devastated and innocently asked his local priest “why the blissful expression of true love was considered a mortal sin?” He once again contemplated entering the monastery, and for a while became a total recluse. He was even mistakenly pronounced dead in October 1828 by an article published in Le Corsair. Franz only saw Caroline once more, when he visited her at her home in Pau, in 1844. Caroline was unhappily married, and maintained that “Liszt had been her single shining star”. Concordantly, upon receiving word of her death in 1872, he wrote, “She was one of the purest earthly manifestations of God’s blessing”. In the meantime, however, Liszt’s thoughts of entering the monastic orders gave way to “exercises in the lofty French style”. Please do join me next time, when I will tell you more about his exercise partners!