Artists Behind the scenes
Leonard Bernstein and the Nixon Tapes
by Georg Predota May 14th, 2017
Tags: Bernstein 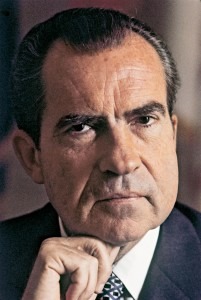 Leonard Bernstein’s Mass was commissioned by Jacqueline Kennedy as part of the opening ceremony for the John F. Kennedy Center for the Performing Arts in Washington, D.C. It premiered on 8 September 1971 and is based on the Roman Catholic liturgical sequence amplified by inserting “tropes” and “meditations” which provide commentary. An original cast consisted of a Celebrant, three choirs, and altar servers, while a full classical orchestra performed in the pit. Onstage musicians included a rock band and a marching band and everything from bongos to kazoos as well! Critics called the work, “derivative and attitudinizing drivel,” “sub-literate rubbish,“ “pretentious and thin,” and “cheap and vulgar.” On the other hand, the FBI called it “definitely anti-war and anti-establishment.” In particular, the Bureau warned the White House that the Latin text of the Mass might contain subversive messages. 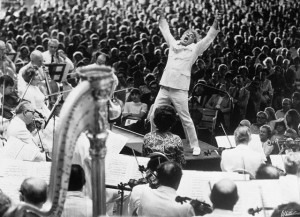 With the Vietnam War top of the political agenda, any anti-war messages could potentially cause embarrassment to President Nixon should he attend the premiere. Nixon was habitually paranoid, and between February 1971 and July 1973 he secretly recorded 3, 700 hours of his phone calls and meeting across the executive offices. The tapes only came to light during the Watergate scandal of 1973/74, and Nixon’s refusal of a congressional subpoena to release the tapes constituted an article of impeachment, which led to his subsequent resignation on 9 August 1974. On these tapes Nixon is advised to avoid attending the “Mass,” and the president eventually attends the National Symphony gala concert instead. Following the preview performance of the “Mass” on 7 September, Nixon receives a report of “absolutely sickening” events, including “Bernstein’s tearful response to the ovation, his embraces of members of the cast, the kisses he bestowed on the men.” A couple days later Nixon applauds the news that a negative review will appear in the New York Times, written by Harold Schonberg. And once again, Bernstein’s support for the Black Panthers becomes the focus, this time garnished with details that Bernstein “is kissing people on the mouth, including the big black guy.” For Nixon, “Bernstein was the personification of the complete decadence of the American upper class intellectual elite,” and he predictably ended up calling him a “son of a bitch.”