In Tune Society
A Symphony Orchestra in Bombay
by Serenade May 14th, 2017 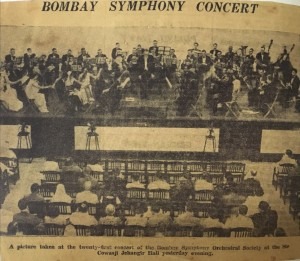 This September, the Symphony Orchestra of India, India’s only professional orchestra, is ten years old and will present a special anniversary season of canonic orchestral works at the orchestra’s home, the National Centre for the Performing Arts (NCPA) on the southern tip of Mumbai.

Mumbai has always been a stopping point for Symphony Orchestras in their world tours, and has, over the years, played host to a plethora of world renowned ensembles and soloists. Until 2006, though, Bombay had never had it’s own professional symphony orchestra.

Whilst the SOI is indeed, India’s first fully professional symphony orchestra, employing musicians from across the globe alongside international soloists and conductors, it is not the first, or indeed the only, orchestra in Mumbai. The history of the symphony orchestra in Mumbai actually spans over a hundred years; orchestral playing is in the city’s blood, it is a tradition infused with passion, dedication and perseverance. 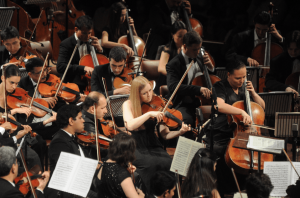 The story of the Western classical symphony orchestra in Mumbai, or, Bombay as it was known back then, begins in 1920 with a gentleman named Edward Behr. Bombay at the time had seen many smaller scale Western classical music performances, usually consisting of songs from light operas or solo instrumentalists, organised by various amateur musical societies and almost entirely dominated by the city’s British residents.

Behr, a German citizen educated at the Royal College of Music in London, was the conductor of the Governor’s Band and leader of several small scale light opera productions in the city. In June 1920 he wrote a long and detailed letter to the Times of India outlining his plan for the formation of a full Symphony Orchestra, the first of it’s kind.

“My second scheme is that as the orchestra would be for the people, it should be of the people also – that it should consist of Indians. Mahomedans, Hindus, Parsis, Goanese, Anglo-Indians, in short, of any musical talent to be found in this country strengthened by capable European players in different sections of the band.”

“I should take women as well as men.”

An orchestra for the people and of the people. A mixed religion, mixed ethnicity, mixed gender orchestra would have, for its time, been a highly controversial and progressive notion. This level of cosmopolitanism was unheard of in European orchestras, and would certainly have been groundbreaking in Mumbai. Behr, though, was not in a position to refuse willing musicians of any ethnicity or gender, and saw the orchestra as a means to create local jobs and to inculcate in India a love of symphonic music by actively engaging local musicians.

But who was to fund this grand scheme? Behr implored the Bombay municipality to fund his orchestra, writing in the same letter:

“If this can be done in Shanghai why not in Bombay with all its wealth?

It (Western Art Music) is the highest form of the art that has been developed and it is as desirable a form of culture in a great modern city as good architecture, good manners and any other kind of higher education.” 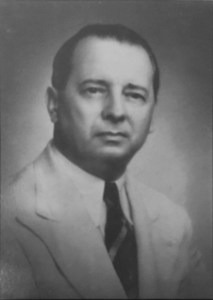 The municipality did not fund the orchestra, however a wealthy Indian philanthropist named J.B. Petit did and Behr received a huge donation of Rs. 25,000. This donation allowed Behr to embark on his musical endeavour, and in 1921 the first Bombay Symphony Orchestra was born, with a staff of four professional musicians from India, three Europeans, members of the Governor’s band on wind and brass, and local amateurs. They played their first concert at the Excelsior theatre in March 1921, to great critical acclaim. The orchestra continued to perform regularly over the following five years, eventually fizzling out entirely in 1928 due to lack of ongoing funds and public apathy.

In 1935, a mere seven years after the first Bombay Symphony Orchestra folded, local violin maestro Mehli Mehta and Belgian conductor Jules Craen gathered together local amateur players and professional musicians from the hotel bands, and formed another orchestra, which they also named the Bombay Symphony Orchestra. Bombay’s western-music aficionados, which during years around the war was swelled with a constantly fluctuating mix of foreigners as well as a steadily growing wealthy Indian elite, were once again able to experience symphonic music. The orchestra performed regularly, using the Cowasjee Jehangir Hall as their main venue, and also provided accomplishment for visiting musicians passing through on concert tours around Asia. 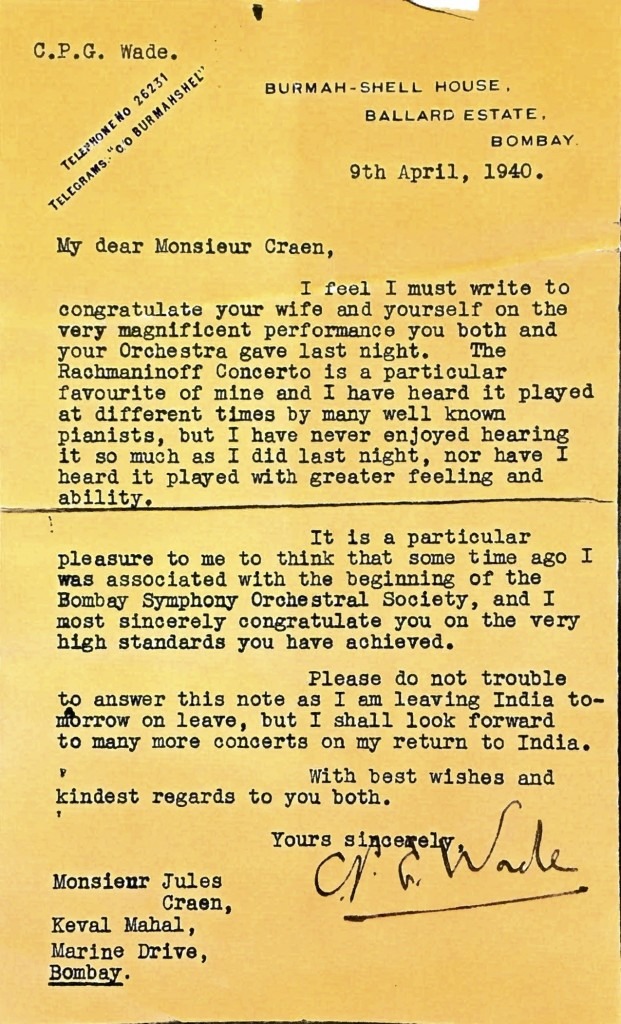 “The Bombay Symphony Orchestra, in which Parsis, Muslims, Hindus, Goans, Hungarians, Frenchmen, Germans, Austrians and Englishmen combine to produce harmony. Mon. J. Craen the conductor, claims to lead the most cosmopolitan orchestra in the world.” 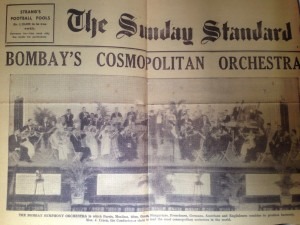 By the 1950’s the orchestra was struggling. Mehta had gone to live abroad and Jules Craen was unable to continue his role as conductor. As with the first Bombay Symphony Orchestra, there was no funding from the municipality, and philanthropic donations could not be relied upon. There was nobody to take on administrative jobs, nobody with the time and passion to run the orchestra as it had been run by Mehta and Craen.

By 1955 the second Bombay Symphony Orchestra had fizzled out, as had it’s namesake before it. In 1957 it was briefly reformed by a Goan lawyer named Vere Da Silva, under a new name, the Bombay City Orchestra, but again faded when Da Silva left to pursue a career in law in the U.K.

Still, Bombay would not be without an orchestra for long. 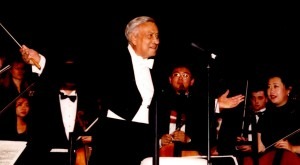 In 1962, a young Parsi woman named Jini Dinshaw arrived back to her hometown of Bombay after having spend the majority of the 1950’s in London studying the violin and completing her diploma at the Royal College of Music. Upon her arrival back into Bombay Dinshaw was dismayed at the lack of musical activity and decided to do something about it.

Dinshaw gathered together a group of like-minded individuals and formed a new society, the Bombay Chamber Orchestra Society, which in turn supported a new orchestra, the Bombay Philharmonia, using old members of the Bombay Symphony Orchestra alongside new members, some Bollywood professionals, and many of Dinshaw’s own students. They invited Professor Koellreutter, director of the Max Mueller Bhavan in Delhi, to conduct them and began putting on concerts. In 1968 the director of the Bombay branch of the Max Mueller Bhavan, Joachim Buehler, stepped in as conductor, and carried on the baton until he left India in 1980, making way for a series of guest conductors specially invited each season. 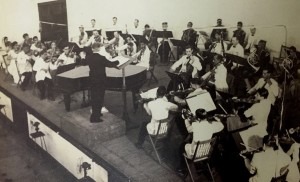 Now called the Bombay Chamber Orchestra, or BCO, this amateur orchestra is the longest-running orchestra in the city’s history and still exists at the time of writing, with Dinshaw the helm as it’s administrator and strings tutor. They perform several times a year at either the NCPA, the Y. B. Chavan auditorium or at Xavier’s college, and have a loyal following. Like Behr and Mehta/Craen did before her, Dinshaw runs the orchestra without any government support or funding, relying entirely on the donations and goodwill of supporters. That she has maintained momentum and kept the orchestra running for over 50 years is something really rather incredible and a testament to the power of passion for music.

The Bombay Chamber Orchestra wasn’t the only orchestra to be founded in Mumbai in the 1960’s. In the late 1960’s in the leafy suburb of Bandra, multi-instrumentalist, performer, teacher, and all-round musical superstar Josic Menzie founded a Pops Symphony Orchestra. The Pops Symphony performed light classical and popular works arranged by Menzie and his students. Like the BCO, Menzie’s Pop’s Symphony was amateur, made up of the many amateur musicians resident in Bandra, often of Goan origin, though he sometimes invited Bollywood professionals to fill empty seats. This orchestra carried on throughout the 1970’s, disbanding at the end of that decade. 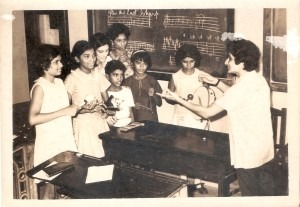 In the early 1980’s conductor Parvez Doctor formed the B.P. Saloon Orchestra, a semi-professional ensemble made up of professional musicians sourced from Bollywood orchestras alongside amateurs. The B.P. Saloon existed until around 2013, and performed a mixture of symphonic and lighter repertoire.

A multitude of other smaller orchestra’s and music societies have existed along the way: Cecil Mendonca’s Choral and Philharmonic Society in the 1940’s, the Bombay Madrigal Singers’ operas in the 1960’s, the Sangat Festival Orchestra, organised by the Mehli Mehta Music Foundation, which formed for a short time each year from 1996 until just a few years ago, to name but a few. And throughout it all, Bombay has had it’s symphony orchestras, indeed, since 1920 the city has only had a total of twelve years when there has not been an active orchestra.

Until the SOI formed in 2006 the story of the Symphony Orchestra in Bombay was one of passion but also one of frustration. Dedicated amateurs always played in Bombay’s orchestras for love rather than money, and passionate individuals worked all hours of the day and night to keep their orchestras going. 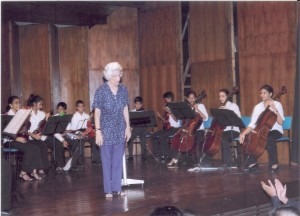 The SOI is somewhat of a different story. Founded with the intention of being a full scale, professional symphony orchestra, paying professional musicians from both India and abroad to play at a world class standard, this orchestra has the prestige and power of the NCPA behind it, bolstered by funding from corporate sponsors, support from international orchestral organisations, and a full-time staff running the management and logistics of what is, after all, a huge undertaking. This orchestra means business.

This is not to say that the SOI sustaining itself for ten years isn’t an achievement; the orchestra has had it’s fair share of hurdles to overcome. It enjoys no government support or funding, it struggles to recruit and maintain full time Indian members (something it is regularly criticised for), and it’s audience has been traditionally from the small Parsi and Catholic communities, with limited interest from Mumbai’s wider population.

Despite this, the SOI has established a base of regular fans who attend concerts every season, and is now reaching out to audiences who are perhaps new to orchestral music, often putting on concerts at the Prithvi theatre in the northern suburb of Juhu. Their tenth anniversary season promises to be a musical extravaganza, with performances of many classical favourites and concertos performed by world famous soloists.

The SOI is one of many orchestras that have thrived in Mumbai, the sole professional endeavour in a long list of amateur orchestras made up of local musicians playing for the love of music, giving their time for free, and keeping the tradition of orchestral playing alive in the city for all it’s residents to enjoy.

By Hannah Marsden
This Article first appeared on Serenade Magazine on September 1, 2016.