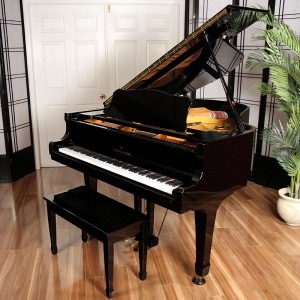 The armistice of 1953, although never signed by South Korea, mercifully ended an extended civil war on the Korean peninsular. A heavily fortified demilitarized zone kept the warring factions apart, but since no peace treaty was ever signed, the two Koreas remain technically at war. With substantial financial support from the West, South Korea gradually emerged as a major economy and producer of high quality consumer goods. Samsung, Hyundai, Kia and LG eventually became household names throughout the world. In 1956, three enterprising brothers, Jai-Young Kim, Jai-Chang Kim and Jai-Sup Kim, set out to establish the first piano brand in Korea’s history. Initially, the new company manufactured Yamaha brand pianos in Korea and other parts of Asia, but soon they built a homegrown instrument by the name of “Young Chang.” 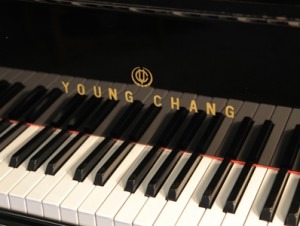 Over time, the new instrument featured a number of distinctive innovations. For one, a former vice president from Steinway & Sons joined the company and created a patented asymmetrically tapered soundboard. This curvature is the result of a process of gradual bending of components in a climate-controlled chamber. The inventor Joseph Pramberger claims that this unique feature is responsible for the transparent and distinctive sound the instrument produces. In addition, utilizing a high-tech precision vacuum cast yields a cutting-edge piano frame that affords the performer an extended range of musical expression, and allows for great power and depth of tone. Pramberger also introduced the “Platinum Touch Action,” a further development of the German “Renner action” that also features in the Bösendorfer Imperial. As a result, Young Chang pianos are highly responsive to the touch. 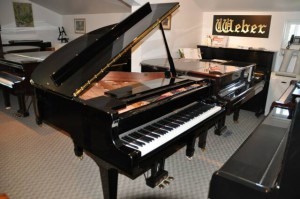 Young Chang produces a number of upright models, ranging from the basic “Y-116” and “Y-118” Studio Upright to the Professional Uprights “Y-121” and “Y-131” and the Designer Upright “Y118R.” The Grand Piano product line includes a Baby Grand, a Classic and a Professional model. However, the top of the line product at Young Chang is currently a piano marketed under the name “Albert Weber.” Manufactured in a separate production line, Weber pianos originated in Bavaria in 1852 and eventually started production in the United States. Officially used by the New York Metropolitan opera house in 1883 a Weber once again stands on stage of the Grand Theatre at the Lincoln Center. During the late 19th century, Ignacy Paderewski, Moritz Rosenthal and Jorge Bolet performed exclusively on the Weber Grand piano, and Pope Pius X purchased a Weber for his personal use. Even today, the Weber is designated the official Vatican piano! In due time it also became the official piano of the royal family in England, Wales, France, Italy, Belgium, and Sweden. Weber became a division of the Aolian-American Company that went out of business in 1985. At that stage, the brand name and the manufacturing process was sold to Young Chang. In 2006, Young Chang opened an additional manufacturing facility in Tianjin, China. Currently, Young Chang is a member of the Hyundai Development Company and has been able to corner roughly 50% of the Korean piano market.